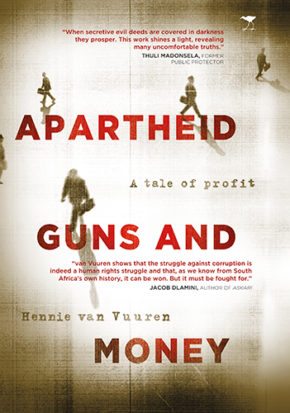 A tale of profit

Hennie van Vuuren, a director of Open Secrets, has in this 514 page expose (excluding the detailed Endnotes and index), blown the lid off some of the darkest secrets of apartheid’s economic crimes.

Many of the findings in the book which were sourced from archives in eight different countries and from thousands and thousands of pages of previously classified documents, will confirm what many of us knew or suspected, and make believers of those Doubting Toms.

While it is a meticulously researched book and points a finger at the players who were complicit in apartheid crimes, including prominent South African businessmen, politicians, journalists, and sanctions-busters, some of Van Vuuren’s allegations are not always backed up by solid evidence.

Although Van Vuuren doesn’t put it as bluntly, he believed that former Rand Daily Mail investigative journalist, Mervyn Rees, who was instrumental in uncovering the Infogate/Muldergate scandal: the government’s attempts to buy influential overseas newspapers and, of course, fund the Citizen, had very close ties to the Security Branch (SB) and this raises questions about his legacy and the motives of his sources.

Terry Bell, one of the country’s top labour reporters who worked with Rees, suspected that he had links to the security establishment. However, Rees died before Bell could confront him with his allegations. Chris Olckers, another well-known journalist back in the day and a spy for the SB said that Rees was a regular visitor at the special braais organised by Police General Johann Coetzer. Invitations were reserved for “only the trusted”. In my view that’s at best circumstantial evidence.

Van Vuuren also unearthed letters from notable businessmen of the time including Bertie Lubner of PG Glass; Louis Shill, founder of Sage; Eric Samson of Macsteel; Bill Venter (Altron) and Tedelex founder, Bennie Slome, confirming they made substantial donations to the National Party, personally or through their businesses, which ranged from R20 000 to Barlow Rand’s R200 000 “to keep the NP sweet”. These donations were traced back to 1985.

The Smit murders which rocked the South African establishment in November 1977 also features in the book. Robert Smit and his wife Jean Cora were killed in their home by unknown assassins, who sprayed graffiti and painted the word RAUTEM on a wall. To this day the murderers are still at large and no-one has yet decoded RAUTEM.

According to Van Vuuren, Smit, an economist, was a sanctions-buster, and he reportedly told a university friend from Oxford that he “had developed plans to circumvent the oil sanctions against South Africa”. There are a few more threads but they don’t explain the motive for the murders.

(However, many years ago I was asked to read a manuscript. The tattered typewritten (before computers) pages of the novel filled an apple box. The story was written by Infogate’s Eschel Rhoodie, the former Secretary of the Department of Information and was based on the shenanigans of the apartheid government. Some chapters were devoted to the Smit murders and there were thinly veiled references to the people involved which included former finance ministers Dr “Mr Gold” Nico Diederichs and Owen Horwood, among them. The book was never published but from time to time rumours of the manuscript’s existence surfaced in the popular press).

The National Party’s securocrats smuggled half a trillion rand through a complex money laundering scheme with the connivance of banks that could keep secrets. A system of hundreds of front companies which for 20 years was the conduit for 70% of the cash used by South Africa to buy weapons illegally, was also in play at the time. The chapter, The Arms Money Machine, details how the system worked, the banks and personalities involved. It makes for chilling reading to see how people connived with a pariah state all because of greed and their bigoted beliefs.

Another assassination that remains unsolved is that of ANC activist, Dulcie September. Van Vuuren postulates that the French, who wanted to sell arms worth billions to South Africa, was involved, and it appears to be confirmed by another South African operative, Vic McPherson, who claims that the French could have used a South African connection to do their dirty work. “The guy who killed her has disappeared, nobody knows who that guy is, and they will never know,” McPherson told Van Vuuren.

Despite South Africa’s pariah status hundreds of people, and several countries: the United States, Israel, England, France, China, Switzerland, Panama and the Eastern Bloc, among them, couldn’t wait to do business with them.

Van Vuuren’s expose has shattered several myths: corruption is not a post-apartheid phenomenon driven by blacks and that Apartheid South Africa was an isolated state. It also shows that the people who created the machinery in defence of apartheid were guilty of crimes against humanity.

Apartheid Guns and Money reads like a John Le Carré thriller. Even his fictional character George Smiley OBE would be gobsmacked at just how deep the tentacles of evil permeated South Africa and how the country is still feeling the consequences of the economic crimes which were at the heart of apartheid.

* Van Vuuren co-wrote with Paul Holden another book about the arms deal, The Devil in the Detail (Jonathan Ball, October 2011).