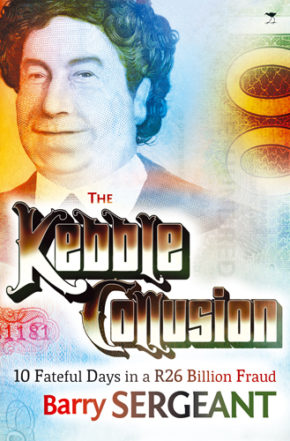 Respected financial journalist, Barry Sergeant, who recently died on his farm in the Free State, wrote The Kebble Collusion in 2011, after the death at 41 of Brett Kebble, and it deserves to be revisited.  Especially since the publication of Hennie van Vuuren’s Apartheid Guns Money, just to see how deep the rot really went.

Like the Arms Deal it involves a massive cover-up and a R26 billion fraud, top financial institutions, leading bankers and of course, the man at the centre of it all, Kebble, a larger than life personality, was found dead in his car in a Johannesburg park, in 2005, which at first seemed to be an assisted suicide. Nobody was convicted of the crime, although a gangster, the boxer, Mikey Schultz, admitted to being involved.

Kebble was often referred to as South Africa’s “JR Ewing” but without the oil. However, his dream was to be a mining magnate and it was inevitable that people began comparing him to the flamboyant Randlord, Barney Barnato, who was active on the gold fields of Johannesburg in the 1880s. No doubt it helped to stroke Kebble’s ego, which wasn’t small to begin with.

Barnato too, died in mysterious circumstances, in 1897. Officially, he was lost overboard near Madeira on the way to England. His body was recovered but if he was murdered , the murder was never solved.  An heir of Barnato’s, Woolf Joel was shot dead in his Johannesburg offices in 1898. Ludwig von Weltheim was charged but he claimed he wasn’t properly compensated for planning a kidnapping of President Paul Kruger and he was acquitted.

Later Von Weltheim was convicted in London in 1907 for attempting to blackmail another Randlord, Solly Joel, and sent to jail for 20 years. There are parallels to Kebble’s death but you can read what they are in the book. It appears that history often repeats itself.

The Kebble Collusion is quite a technical book because of all the financial dealings, and you would probably have to be an accountant to understand all the ramifications.

Kebble was at the centre of the thievery as the majority shareholder of the Kebble Group of Companies which consisted of three entities JCI, Western Areas and Randgold. Brett Kebble and his companies, according to Sergeant, were technically insolvent when the Group was formed. But it was Kebble’s sheer force of personality that kept creditors at bay

It is definitely not a book to read if you want to while away a lazy Sunday afternoon. It is complicated although there are info graphics to help the reader understand the issues and why Kebble did what he did.

Kebble built up a mountain of debt in search of  the holy grail of South African mining at South Deep and which eventually  led to his death.

In his preface, Sergeant writes: “it is about Kebble’s brilliant and criminal business career, and, tells of the many people who have worked tirelessly to cover the story up. I say shame on you. But the story is out now.”

I think Sergeant had a sneaking if grudging admiration for Kebble who possessed an extraordinary intelligence and was a good reader of people. Two months before Kebble was murdered, Sergeant, who was “apparently unofficially appointed the magnate’s biographer”, spent two hours with him, and even then he would not concede any personal responsibility for the fraud. Sergeant ends on a hopeful note, “this book is in a sense about wanting to make the world a better place. I hope by seeing what really went down in this sordid saga, readers will be outraged enough to want to see justice done.”

So far no-one has been prosecuted for their part in the massive fraud. And just as in the arms deal it is not likely anyone will be. Even Kebble’s killers are still at large.

Sergeant’s other book about the fallen mining magnate was titled Brett Kebble: The Inside Story, which was published in 2006.