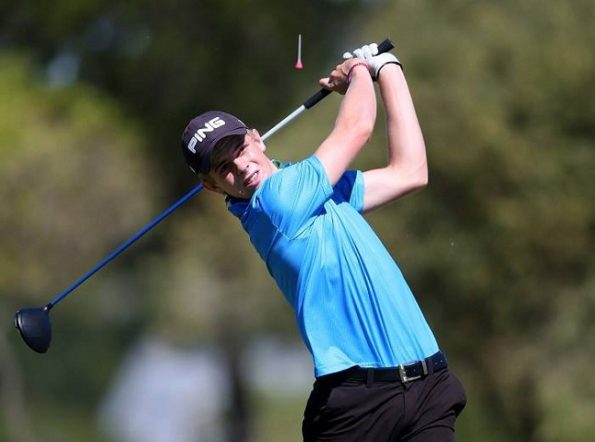 The 15-year-old Vorster from Mossel Bay carded rounds of 67 and 72 at Golf Club Biella le Betulle in Bielle to triumph by three strokes on seven-under-par 285.

Initially disappointed with an opening one-over-par 74, the GolfRSA National Squad player broke into the top 10 with a grinding 72 in the second round.

“I tied for ninth in my debut last year, so my goal was to come back and win it,” said Vorster. “I battled with distance control in the first round and I was really disappointed to shoot over par, but I struck the ball much better in the second round to tie for seventh.”
Aiming to crack the top five in the third round, the Louis Oosthuizen Junior Academy player made the worst start imaginable.

“I bogeyed the first three holes and I knew I needed to regroup and dig myself out of the hole,” he said. “I got it back to level with birdies at four, seven and eight and got inside the top five at two under with an eagle at the par five ninth.”

After a bogey start to the back nine, Vorster rallied with a trio of birdies from 11 and added more gains at 15 and 18 to sign for a six-under-par 67.

He rose straight to the top of the pile and, after a chat over lunch with sport psychologist Theo Bezuidenhout and team manager Eden Thompson, the Southern Cape teenager set off in the fourth round with a two shot lead at six under.

“Theo told me to forget about scoreboard and just focus on my game,” said Vorster.

“He told me to forget about everything else and if someone in the crown said something good, I should only think about the last shot I played and last putt I made. He suggested that I make it my goal to play the course and forget about the other players. That really helped me to set my mind for the final round, because it’s so easy to get ahead of yourself.”

Unlike the first three rounds, Vorster made a solid start.

“I left a few birdie putts out there over the first six holes, but made I made some seriously good up-and-downs to save par and holed a 15-footer for birdie at the fourth,” he said. “Unfortunately I hit my tee shot at seven into the long grass and trees. We searched for about three minutes before we found the ball and I hit a great shot in to six metres, but three putted for bogey.”

Another three-putt bogey followed at eight, but he made great par saves at nine and 10.

“I chipped it to three foot and made the birdie putt at 11 and hit nine-iron two inches at 12 and made the birdie,” said Vorster. “Unfortunately I bogeyed 13 after I overdrew my approach shot, but I made solid pars from 14 to 17 with some good ball striking, especially at 15 and 16.

“I hit eight-iron to the pin at 162 metres at 17, but the adrenaline was pumping. It finished 10 metres past the pin and I left the first putt nine feet short. I holed the second to save par and that gave me some great momentum for the tough finishing hole.

“I hit my drive down the middle of the fairway and I only had 176 metres left. Knowing what happened on 17, I went with an eight-iron instead of a seven-iron. The ball caught in the right fringe of green and I putted it to two foot and holed the birdie putt.

“I am really proud of the way I overturned the bad start and I am so grateful that I could use what I learned in last year’s championship to get my first international win. I have to thank Eden (Thompson) and Theo for keeping me positive and in the zone. Above all, the glory goes to God.”

Premlall from Ekurhuleni carded rounds of 75, 73, 74 and 74 and North West junior Van Dyk returned rounds of 70, 77, 74 and 75. The fourth member of the team, Ayden Senger from Western Province, did bag-duty for Van Dyk on the last day after missing the cut.