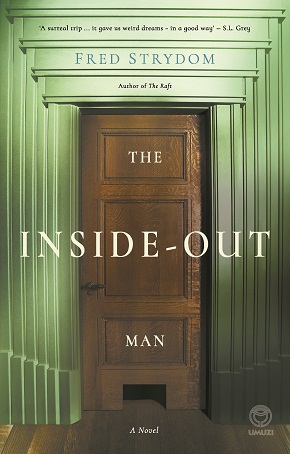 We all know what happened when Dr Faustus (Faust) sold his soul to the Devil. He didn’t sell his soul to the devil but when he lost his faith and his idealism he became a black magic sorcerer and summoned Mephistopheles (Mephisto) and they made a pact in which Mephisto offered to serve Faust, at the cost of the doctor’s soul. However, Mephisto was not an easy taskmaster and challenged Faust with his tricks and deceptions. Faust tried to revoke the pact but without success. That’s the theme of this riveting book, The Inside-Out Man.

The protagonist is Bentley Croud, but everybody calls him Bent, a more than talented jazz musician who survives from gig to gig, playing in some seedy spots.  He was born in Lower Main Road, Observatory,  brought up by his single mum, a piano tutor and later a drinker of note.  Of his father, Bent doesn’t remember much, although according to his mother, he was a shipbuilder who didn’t want the responsibility of a wife and child so he took off for parts unknown.

Bent’s mother died when he was 18, left alone in the world, apart from his long-gone father.  So he starts playing in dives after applying for a job as a barman and waiter, where a sympathetic restaurant owner gives him instead an opportunity to display his musical talent.

Now Bent is living at the Crack Radisson on Bree and Orphan streets, Cape Town. His neighbours are odd and include an agoraphobic (anxiety disorder) schizophrenic, a professor who was once been Head of Applied Mathematics at the university, and to whom the patterns of numbers meant everything. He was dismissed after child pornography was found on his computer. His wife left him soon afterwards which is how he ended up at the Crack Radisson, and as Bent points out in one of the many touches of dark humour in the book, “There was one thing we had in common, though, and for that we may have been smarter than everyone else: we were all paying the lowest rent in town to house our shame.”

One night Bent gets a call from an uncle who tells him that his father had died. After the funeral Bent visits an attorney about his father’s last will and testament. To Bent’s great surprise he learns about his inheritance that includes an ornate, small antique box containing a long, rusty key, with no clue as to what it opens or locks. The attorney tells him, “it could have sentimental or metaphorical value – who knows?”

Following the reading of the will Bent has nightmares and can’t sleep: on the third night of sleeplessness he sees a man in his tatty old armchair which turns out to be an illusion or is it? Bent’s befuddled brain can’t process it.

When he goes to his next gig and after playing like a man possessed although he has no idea what happened on the stage that night, a man approaches with an offer he can’t refuse, although he does take time to consider it. In exchange for R2 million cash, the man, Leonard Fry, a wealthy and eccentric jazz aficionado, and asks Bent to play the piano from Friday night to Sunday night, at Krymeer, the mansion he owns, for a farewell he is giving for his friends who have particular tastes.

Bent accepts and plays in a room out of sight of the guests. After the successful weekend Fry persuades Bent to stay for dinner and then makes him the offer that will turn his life upside down and inside out.

Fry asks Bent to take part in an experiment which will give the young pianist the opportunity to start afresh and question everything he knows or assumes he knows, and living a life of undreamed of luxury. However, the catch is that Bent will become a prisoner to his own desires. And Fry will in a sense be his prisoner for a year.

The deal is for Bent to live in the house while Fry stays in a room for 365 days and all that Bent has to do is pass food to him through a slot in the door three times a day, and no matter how much Fry cajoles and pleads Bent must just ignore him. For this he will be paid so well he will never have to work again, and he can have the run of Krymeer – “a place of awfulness” – cursed really, that “sucks the goodness out of everything”.

The key to this psychological thriller is the letter from Bent’s father, or is it? Which shares his side of the story, and does not agree with what Bent’s mother used to tell him. To say more would be a spoiler.

Strydom’s writing is beautiful and with just a few words he creates a living, breathing human being, from Jolene, who likes to host dinner parties for strangers; her young son Edgar; Bent and Carl, the deaf Michelin chef, 83, who caters for Fry’s every taste.  Even the seedy venues where Bent plays his jazz take on a life of their own. Strydom includes allusions to literary texts and movies, and half the fun is to guess what they are. One reference is the blood that seeps in to Bent’s finger nails when he accidentally kills a dog one night while driving an Aston Martin, one of Fry’s stable of super sports cars.  It’s an obvious allusion to the blood on Lady Macbeth’s hands.

The Inside-Out Man is a gem. It is compelling reading from the first page to the last.