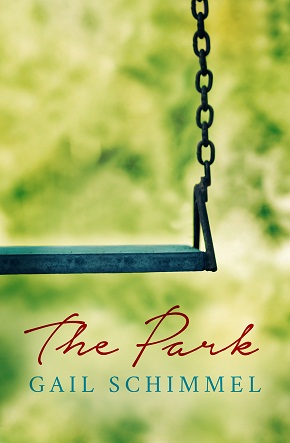 The Park focuses on three women Rebecca, Rose and Lilith, with their children, adopted “cappuccino-coloured” Amy; Maggie and Ruby-Mae respectively, who meet regularly in a suburban Johannesburg park.

Rebecca and Rose become friends when they meet in the park. They are already grappling with their own issues, when Lilith, a hard-working single mother joins them. As Rebecca and Lilith become closer Rose, who has a strong connection to Rebecca, feels left out.  All the players in The Park are fully fleshed out and they share each other’s triumphs and defeats.

Some interesting characters include Rebecca’s school friend, the lawyer Lerato, and the eccentric Mrs Clarke who owns a sex-shop on the ground floor of the block of flats where Lilith lives and who sometimes babysits Ruby-Mae. An unwelcome visitor from Lilith’s past, Ron Buckley, threatens to put a spanner in the works.

Lerato seems especially fixated on race. As Rebecca, who is trying to fall pregnant through fertility treatment, points out, Lerato is the “oracle on South Africa’s racial norms” and she believes IVF is a “white thing”. Lerato, drops a bombshell when she confesses to Rebecca she is having an affair with Rose’s husband, Aiden McFarlane, one of “those white men who only like black women”. Even though she is seeing someone else.

Despite their obvious differences, the three women form a strong bond and have each other’s backs and tackle head-on the challenges that life throws up.

When Rebecca and Lilith are in the park, Lilith visits the public toilets for an hour or so. She was constipated, she tells a frantic Rebecca, who knows this is not true because she asked the security guard. So what was Lilith really up to?

Then Lilith, disappears for good leaving Ruby-Mae in Rebecca’s. care.

So where is Lilith?

One of the funnier episodes is when Rebecca who has a lunch date with her two park pals, has no option but to leave her daughter with the eccentric Mrs Clarke.  Rebecca has serious misgivings about leaving Amy, who refers to the store as the “set shop”,  with the bottle-blonde who has to enter  a room, sideways through the door.

One of the telling lines in The Park is spoken by Rebecca: “It is a fact that with friends, you have to take them for what they are. And for me, Rose had always been kind and supportive.”

Schimmel cleverly explores issues which often make headlines in the newspapers and serious features in women’s magazines and crop up in Agony Aunt columns. Racism, jealously, crime, IVF and relationships and across-race adoptions.  All of these topics are handled with sensitivity and empathy.

I often wanted to consign The Park to the bottom of the pile after reading a few chapters. But I persevered because of the opening line: “Most days back then, before it all happened, I took Amy to the park”. What happened is completely unexpected.

The Park is an excellent read that will give you plenty of food for thought. Despite my initial misgivings I enjoyed it and can recommend it. Even though you may have second thoughts about making friends with the people you meet in your neighbourhood park.