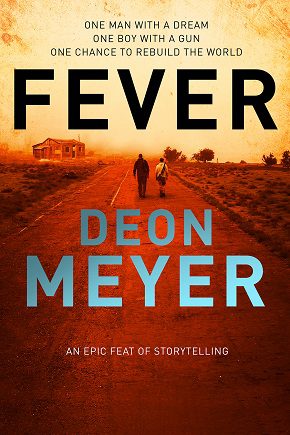 Deon Meyer is best-known for his detective thrillers featuring alcoholic cop, Benny Griessel, an old-style policeman who is struggling to come to terms with the new South Africa.

Griessel was the protagonist in, among others, Devil’s Peak, Thirteen Hours, 7 Days, Cobra and Icarus, and the recently screened TV series, Cape Town.

Meyer has also written Blood Safari and Trackers in which Johan Lemmer was the central character.

Fever is a distinct departure for him, although the setting is still South Africa, mainly the Karoo.

A virus wipes out most of the people on the planet, with pockets of survivors here and there. Among them are father and son, Willem and Nico Storm, 13, who are driving through a bleak and desolate landscape, doing their best to survive. Without their wife and mother, who was taken by the virus, or so Nico believes. They stop at a deserted Koffeefontein where they plan to refuel their Volvo diesel truck. While refuelling, the Storms are attacked by a pack of feral dogs and Willem kills them but not before being severely bitten. Nico dresses Willem’s wounds and after filling up the lorry they continue their journey. However, Willem is too ill and they seek refuge at Vanderkloof, a “deserted jumbled up” town on the banks of the Orange River. Which is where the story plays out in a post-apocalyptic world.

Willem, by all accounts, is an erudite man and a scholar with a vision: to establish a new world, Amanzi, starting from scratch with other survivors from the fever, an air-borne virus.

Somehow the survivors find their way to Vanderkloof, often after a long and arduous journey, who have heard about Amanzi through the flyers that Willem and Nico have distributed in various places during their travels to their Utopia or is it Dystopia?

Among the people that make their way to Amanzi are Domingo, a man with a past who is in charge of the defence of Amanzi and builds an army out of a motley bunch of people; pilot Hennie “Fly” Laas; Pastor Nkosi Sebego, who later leads a breakaway group to another Utopia; scientist Cairistine “Birdy” Canary; Nero Dlamini, a psychologist; Sofia Bergman; Beryl Fortuin and the orphan Okkie.
The tranquility of Amanzi is shattered when the KTM gang, a plundering, pillaging and looting bunch of thugs attack Amanzi leaving many residents dead or wounded. Behind the deadly mission is Number 1 aka Trunkenpolz, the chairman of the Sales Club, which is not as benign as it sounds.

The chronicle of Amanzi is told through the various characters to preserve its history for posterity. It is also the story of the murder of Willem Storm and the investigation by his son. “I want to tell you about my father’s murder. I want to tell you who killed him and why. This is the story of my life. And the story of your life and your world too, as you will see,” writes Nico in the beginning.

There is a surprise twist that leaves you with a glimmer of hope for a better future, a better world.

The story is reminiscent of James Hilton’s Lost Horizon, also about a group of people seeking a mythical Shangri-La, where people live to a ripe old age. The book was made into a movie by the late director, Frank Capra, in 1937.

Fever, which is an entertaining read, although there are too many threads to the story line. It has all the elements of a blockbuster movie. However, a good editor will make sure some of the extraneous bits will be left on the cutting room floor so the director can use them as out-takes when the credits roll.