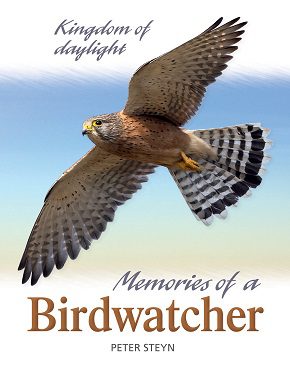 Memories of a Birdwatcher

To be a successful birdwatcher you need the patience of Job and Peter Steyn has that in abundance.

Steyn has been a birdwatcher for more than 70 years, starting when he was pupil at Bishops, intrigued by his first sighting of a  Spotted Eagle-Owl in a pine tree in the school grounds, and “ignited his passion for owls”, which he recounts in his 1984 book, A Delight of Owls.

In Memories of a Birdwatcher, Steyn records his birding activities across the world – from Table Mountain (In the Shadow of a Mountain) – to places as diverse as America, Australia, Ethiopia, New Zealand and Zimbabwe – literally the A to Z of the world’s prime birding spots.

Each chapter describes the birds in the area but Steyn also recounts interesting anecdotes of the places he visited and the species he has ticked off. When he was a teacher at Bulawayo’s Falcon College, later known as Falcon, (an apt name for a birder). It was here where he would later observe eagles. Steyn didn’t, however, see Charlie, the ghost of a miner who was killed in an accident, and who reportedly stalks the school corridors.

On a visit to the Galapagos he celebrated his birthday aboard the expedition ship, Eric, and was presented with a cake and a card signed by everyone on board. “It would be hard to imagine a more memorable birthday than this in those unique islands,” he writes.

Steyn and his wife, Jenny, were part of a Zehgrahm Expeditions group that took them on a journey that would take them to three sub-antarctic islands round South Island back to their starting point in Christchurch, New Zealand. A memorable sighting on that trip was the Hall of Antarctic Discovery.

On the same expedition Steyn visited a farmer who had set up a small breeding facility for the rare Yellow-Eyed Penguin. The other unusual sighting was a Swamp Harrier, as New Zealand is not a prime destination for birds of prey. The only other raptor is the endemic New Zealand Falcon.
Ethiopia was another exotic destination with 15 mostly Americans on an Eco Expeditions tour where they spotted White-backed and Hooded vultures and a mounted specimen of a Walia Ibex, but none in the wild. A colourful character was the leader of  the expedition, an eccentric Englishman, Jeffrey Boswall, who wore the same jacket, but a different tie, daily for 18 days, irrespective of the weather.

Steyn also visited St Helena in 2007 and 2008 aboard the cargo ship, RMS St Helena, where they saw the island’s only indigenous landbird, the Wire Bird or the St Helena Plover, which gets its name from its extremely thin legs.

On their second trip they went to Ascension , which was discovered in 1501 by a Portuguese explorer, Juan de Nova. Occasionally sailors stopped there to harvest Green Turtles for rations. The turtles were so big that a special technique was used to turn them over, which, says Steyn, gave rise to the expression, ‘turn turtle’.

Here’s another fascinating anecdote: when Steyn was at Fernandino in the Galapagos, he photographed the extremely rare Flightless Cormorant which was later used in David Attenborough’s book, The Life of Birds.

In the Epilogue Steyn asks: “How does one encapsulate such a corncupia of memories?”  Steyn says that he honestly doesn’t know how many birds he has seen in Africa and internationally. However, in July 2016 Steyn discovered a Rufous-tailed Scrub Robin at Zeekoei Vlei, in the Western Cape. It has already attracted 1 250 “twitchers” from around the country.

Memories of a Birdwatcher is much more than a book about a birds. It is a fascinating memoir of a birdman’s travels both at home and abroad. Most of the colourful and evocative images are by Steyn. The photographers are given credit on the “dedication page”  and include Hugh Chittenden; Eric Hoskings; Barbara Heymans and Linda Worsley, to name some.

Steyn’s writing is lyrical and evocative: you often feel that you are with him on his voyages of discovery. Memories of a Birdwatcher should be put at the top of your must-read books for 2017. You will want to dip into it again and again.

* Twitcher is a misnomer for a birder and is often used, wrongly to describe people who travel long distances to see a rare bird that they can tick off on their list. The term originated in the 1950s, when it was used for the nervous behaviour of Howard Medhurst, a British birdwatcher, according to Wikipedia and other sources.