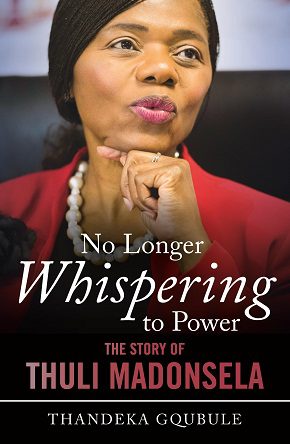 The Story of Thuli Madonsela

If you haven’t heard the name Thuli Madonsela, or read about her or seen her on television then you have been living in La-La Land.  Madonsela was South Africa’s third Public Protector, who was a thorn in President Jacob Zuma’s side. She did her work without fear or favour.

On TV and on the podium she was dignified and quietly spoken. But Madonsela was always an enigma, at least to me. How did someone who almost whispered manage to make herself so clearly heard?

Gqubulule, a journalist and one of the SABC 8 who stood up to the national broadcaster and their chief executive officer, Hlaudi Motsoeneng, over censorship, gives an insight in to the life and times of Thuli Madonsela.  Gcubule has known Madonsela for more than 30 years.

In the 1980s Madonsela was a unionist and was detained without trial in Diepkloof Prison, better known as Sun City. Gqubule who was in solitary confinement for a month at John Vorster Square and was then sent to Diepkloof where she met Madonsela whom she describes as “a comforting presence, not easily disturbed by isolation and psychological pain”.

What is not widely known is that Madonsela helped to draft the country’s new Constitution, giving up the opportunity to pursue her law studies on a scholarship at Harvard University.

Gcubule says that when Madonsela took up the post of Public Protector she believed she would be involved in small cases: unfair dismissals, tender irregularities and improper appointments, to name a few. However, her mission would take her deep into the corridors of power and to the Constitutional Court, starting with Nkandla and ending with State Capture, releasing that report shortly before leaving office, leaving it to her successor, Busisiwe Mkhwebane, to deal with. And we all know what has happened.

Besides being about Madonsela, No Longer Whispering to Power, is also a reflection of the country and the damage Zuma has caused.

The book describes Madonsela’s life journey – from childhood – to adulthood. She was one of six children and the product of what used to be called a “Sheila’s Day” romance, when during the apartheid era, domestics used to traditionally take off work on Thursdays to do their own private chores;  send money home to their children; engage in church activities and meet in one of the many parks in the suburbs.

Her parents were small-time traders and first generation Sowetans, although the rest of the family came from Swaziland.

One of the more emotional cases that Madonsela handled was titled Pipes to Nowhere (2013), about Michael Komape, who died when he fell into a pit latrine, at his school, in Chebeng Village, outside Polokwane. There was a huge outcry at the time of his death and the former Public Protector, in her report, made the point that for thousands of people like Michael real dignity is a pipedream, and will remain so, for as long as politicians squander money meant for the poor.

In the same report she highlighted the maladministration at Nala municipality in the Free State, where the manager “received a dodgy R90 000 performance bonus” for completing  a R200 million sanitation system that wasn’t working.
Another example of brazen looting of state owned enterprises is PRASA. In Derailed, she highlights numerous incidents of maladministration and corruption in the transport utility. Their mandate to improve transportation for everybody, especially the poor, had been “derailed”.  Some of the rolling stock and tracks are still rotting in the veld, somewhere.

As Gqubule points out: “The story of Thuli Madonsela is the story of how we came to lose our way on the quest for a just society – and how we tried to find our way back on to the path of progress.” Gqubule has an easy style of writing and often uses Xhosa idioms and folklore to make a point.

The Epilogue, in which she describes her return to Soweto, taking the advice of Madonsela who once said: “Just as the power of water often lies in the ability to bend around obstacles, sometimes the most powerful step you can take is a step back,” makes for compulsive reading.

No Longer Whispering to Power is an eye-opener. It shows just how deep the rot goes in our much vaunted Rainbow Nation. And many of the reports implicate Zuma, his family and his cronies.

Gqubule postulates that as long as there are people like Thuli Madonsela there is still hope for the “beloved country”.