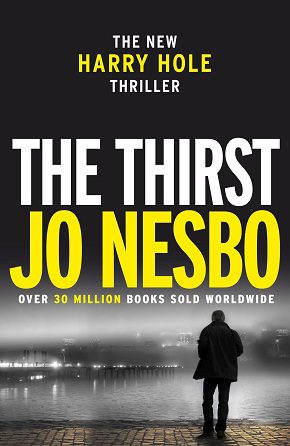 Hip-Hip-Hurrah, Harry Hole is back after his creator Jo Nesbo, ventured into the world of stand-alone thrillers: Blood on Snow, about Olav, an anti-hero – an assassin hired to take out his boss’s wife; The Son in which Sonny Lofthus goes on  a mission to avenge his father, an incorruptible cop who was found dead at home; and Midnight Sun, where the protagonist, Jon Hansen, is on the run and having to make choices about life, and everything else. Although they are good they are not in the same class as the Harry Hole series, and his latest, The Thirst, proves it.

If you’ve never come across Harry Hole before, he has been around for about 20 years and made his debut in The Bat. The Oslo detective is a conflicted personality fighting the demon of alcohol. His personal relationships are also in a bit of a mess, although in The Thirst he is happily married to Rakel whose son Oleg is in police college, where Harry, who has retired from police work, now lectures.

Hole’s not known for respecting authority while his out-of-the-box thinking which takes place in the “Boiler Room” with some trusted colleagues, helps him to get his man.

However, in The Thirst, an old case comes back to haunt Hole and he is persuaded by the corrupt police chief, Mikael Bellman, to come out of retirement, to bring the serial killer who got away once before, to justice.  Bellman is up for the job as justice minister so he has a big stake in the outcome.

The killer is a vampirist, not to be mistaken for a vampire, who uses steel dentures as a weapon to murder his victims, women he finds on social networks.
When the first woman, a self-confessed Tinder addict is found dead the police know they are dealing with a vicious killer and they get confirmation when another victim is brutally killed. The hunt starts in the Jealousy Bar owned by a Turk, Mehmet Kalak, who is in trouble with loan shark, Danial Banks, whom Hole knows. Many of the personalities who have featured in the Hole thrillers are back. They include Detective Inspector Katrine Bratt, head of the investigation and who has just split with her lover, forensic officer Bjorn Holm, who played a big role in Police, the 10th Hole book, about a serial killer targeting police officers); the ungainly and thuggish Constable Truls Bernsten, who is in love with Bellman’s wife, Ulla, and has been since their schooldays; and Hole’s old boyhood friend, the taxi driver, Oystein; and psychologist Ståle Aune, the police profiler, who is concerned about his young daughter.

Nesbo introduces some new characters: a rookie cop Anders Wyller; a gritty hard-nosed news reporter, Mona Daa, who thinks the killer has contacted her;  and another psychologist, Hallstein Smith, an expert on vampirism and Dr John D Steffens, who specialises in blood.

The Thirst is a riveting thriller. It has all the ingredients for a more than white-knuckle read: blood and gore and violence, tempered by the all-to-human players who are fallible like all of us. It will keep you reading until the small hours when the unexpected climax will feel like  a punch to the solar plexus. If you haven’t yet discovered Jo Nesbo and Harry Hole, read The Thirst;  it will make you an addict and fan for life.