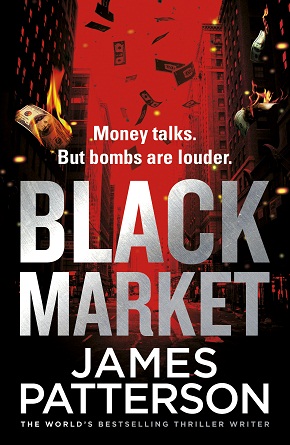 Black Market didn’t have the feel of Patterson’s trademark roller-coaster writing. That’s because it’s the third edition of a book which first appeared in 1986 as Black Friday (Simon & Schuster) and then republished in 2000 (Warner Books), after being slightly rewritten. The thriller is not worthy of Patterson, now 70, who has numerous best-sellers to his credit including the Alex Cross and Murder Club series, stand-alones, written on his own and in collaboration with other authors. It’s not as if he’s short of cash to allow its publication, again.

Set in 1985, a group of disgruntled Vietnam veterans led by the devilishly rakish Colonel David Hudson who lost an arm in the war, and along with his comrades-in-arms, suffers from Post-Traumatic Stress Syndrome (PTSD), hatches a plan to blow up Wall Street, America’s financial centre. And it seems that Green Band is responsible for the ensuing havoc that almost, but not quite, brings the world’s economy to its knees.

The Russians, under the leadership of Premier Yuri Belov and the KGB have also devised a scheme to destroy the West’s economic system, except it’s known as Red Tuesday. What else? But Belov also wonders who is behind Green Band.

Enter Archer Carroll, head of the State Department Special Terrorist Force, a widower with a drinking problem and four children, to lead the investigation. But the results don’t come quickly enough and the young US president Justin Kearney gives him the sack. However, Walter Trentkamp, a long-time friend of Carroll’s late policeman father, persuades him to stay, at least until Green Band is brought to justice.

The romantic interest is provided by the girl from Lima, Ohio, Caitlin Dillon, head of the SEC, who works closely with Carroll. But not only on the investigation. Meanwhile Anton Birnbaum, the ancient sage of Wall Street, tells Caitlin the Red Tuesday plot has been hatched in Tripoli by the oil-producing nations and has been master-minded by the Committee of 12 (a top secret organisation of 12 men) who run America and have set up the Green Band operation to foil Red Tuesday. That’s a conspiracy theory based on the Illuminati, who reputedly run world affairs.

Lurking in the shadows is Louis Monserrat, the supreme terrorist , who could be anyone, the head of the CIA, the FBI or even Trentkamp.  But whoever he is,  he has been pulling the strings behind the scenes for years. Monserrat is so confident and brazen that he is able to murder his Brazilian mistress in the changing room of Henri Bendel, the women’s clothing boutique, without missing a beat. In true Patterson style there is an unexpected twist at the climax, which is the best thing that can be said for this plodding bore.