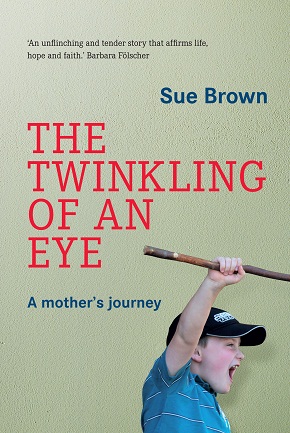 Sue Brown’s life was turned upside down in the twinkling of an eye when her high-achieving son, Craig, was diagnosed with a brain tumour – a rare form of cancer – that caused his death just after his 13th birthday.

The Cape Town mother and her family, husband Neil and daughter Meg, are devastated when they learn why their normally exuberant son and brother became a bully, virtually overnight. Despite what the doctors said, Sue, a physiotherapist, believed that Craig’s vomiting, his nausea and personality change, were symptoms of a deeper malaise. But not what she expected.

Concerned about her lack of empathy at the time, Brown writes: “Later I will ache at my son’s confusion and hurt, and my total lack of understanding as his mother.” When Craig’s friends started remarking about his behaviour the Browns thought “he was a teenage delinquent in the making”.

When the scans reveal the shocking and horrible truth, reality sinks in. Although Brown clings to hope when she hears the doctor say, “hopefully benign”. But that is not to be and one operation follows another. Meanwhile the family and Craig try to live as normal a life as is possible under the circumstances.  They go on holiday to Arniston and to “Craig’s Cabin” at Betty’s Bay and on a school tour to Durban. All the while the rare cancer – ependymomas – is eating away at Craig, and by extension his mother, his father, his sister, his grandparents and his many school friends.

Throughout his ordeal Craig shows flashes of humour, dark though some of it is, his passion for life, which gives an indication of the man he might have been and his true grit shines through.

Ironically, the family received the news of Craig’s cancer in 2010, the year that South Africa hosted the Soccer World Cup and he’s a big fan of what has been described as the most beautiful game in the world. Despite his illness, not yet properly diagnosed, Craig , who has “dreams of becoming the next Cristiano Ronaldo”, enjoys the revelry, the Fan Walk, the excitement of the live games and the chance to see his heroes in the flesh.

The effervescent Craig also won a solo role as the baby kangaroo in the school’s annual Dr Seuss play, Horton Hears A Who! much to his delight.

Meanwhile Sue has misgivings about Craig’s changing behaviour: he has always been outspoken “but he has never been unkind”. Their GP, Dr Mike ,diagnosed Craig’s symptoms as the “anxiety of a high-achieving child in a competitive school”, and referred the boy to a child psychologist, whom he had seen before, and “always happy to talk about himself at length, was now happy to return to her”.

“I am also becoming aware of a disturbing undercurrent of symptoms in my son… Something unfamiliar, but ugly, that has no definable shape or form”.

Soon, however, it was to manifest itself in its most malevolent form.

Finally on the last day of 2010: New Year’s Eve 2011, does “this curve of escalating symptoms reach critical mass – at long last assuming its true form, breaching my maternal defences.”

Craig is in and out of hospital and finally he is taken to St Luke’s Hospice to see out his last days. However, he dies at home and dad Neil carries his son out of the front door because the ambulance men say that the gurney is too big and they must go through the back.

The Twinkling of an Eye could so easily have become a mawkish outpouring of a mother’s grief. Instead it’s an honest portrayal of a painful time. What could be more painful or traumatic for a mother than losing a child? Not much, I imagine.

Although her faith is severely challenged Sue Brown finds a way to carry on and as a catharsis she turned her hand to writing and the result is The Twinkling Of An Eye. “There is indeed a light that shines in the very darkest places, and that the dark is unable to put out,” Sue Brown notes. She also became a volunteer at St Luke’s Hospice in Kenilworth where “she works tirelessly”.

There is a tribute to Craig from sister Meg who writes: “This book is a true testament to Craig, to the impact he made, to the fact that he will never be forgotten. It is wonderful that through this book, people will never stop meeting him.”

The Twinkling Of An Eye is compelling reading and will leave you with a fist-sized lump in your throat as well as a sense of hope.

*The title comes from 1 Corinthians 15:52 which says: In the twinkling of an eye, at the last trumpet. For the trumpet will sound, the dead will be raised imperishable, and we will be changed.