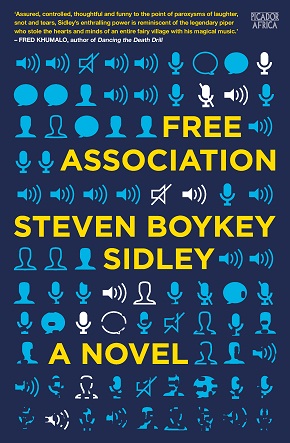 Sidley has an uncanny ability to home in on the human condition with all its frailties, strengths and weaknesses. Which he showed in Entanglement (2012); where the protagonist is Jared Borowitz, a man of science who finds his preconceptions about humanity shattered; in Stepping Out (2013), Harold Cummings, now retired and financially secure, but bored, gets involved with a hooker and her child when his wife Millie goes on holiday; Imperfect Solo (2014) focuses on Joshua Meyer, a Los Angeles-based saxophone-playing software engineer, who finds redemption through a girl named Grace.

Free Association is about Max Lurie, a 30-something solitary Los Angeles resident, who is stunned by the success of his podcast, Free Association, a mixture of fact and fiction that keeps his listeners enthralled with the minutiae of his daily grind – from his imaginary girl-friend and alter ego twin brother Frank – to his father who is dying of Alzheimer’s.
We meet Max on the first anniversary of his podcast and he is wondering where to take it in the future. “Free Association started as a lark,” says Lurie, “because the universe had decided I was a failure as a novelist, and podcasting seemed like a way for me to escape a lifetime of bitterness and regret.”

However, no-one was more surprised than he was when his distributors told him that he had more than 50 000 listeners for each episode.

The story alternates between Lurie’s podcasts and life as it really happens and his interactions with his sister, Delphine; his mother, Vee; his ailing father, Bertie; friends from the past including Stella, an old girlfriend; Gerhard, a former Harvard classmate who has fallen on hard times.

Lurie, who was a psychologist for a brief time in a previous life also consults with his college mentor, Professor Levine.

Lurie delves in to the deep web to do research for his podcast to see how easy it would be to buy a gun. Despite Delphine’s and his producer Bongani Maposa’s advice, Lurie does acquire one, illegally, through the net, and, as the Russian playwright Chekhov, sagely instructs,  if you buy a gun, it must be used. Shooting at a tree, and missing, doesn’t count.

It’s not the only advice from Delphine that Max ignores: she once asked him why he lies in his podcast. “It’s an amalgam,” he says. “Well, be careful,” she warns. “If people know you made stuff up, they might feel cheated.”

When Max befriends a homeless man, Jake, who lives in an alley near his apartment, Delphine’s words prove prophetic. Jake’s a schizophrenic, but also a specialist (PhD) in high energy physics, and when he tunes into Free Association at the library and hears Max describe him as a novelist, he spirals out of control.

Then he gatecrashes a dinner party Max is hosting. And it is up to Bongani to help calm the situation because as a Zulu immigrant he also knows what it’s like to be on the outside looking in, and not only in America.

All the characters are finely drawn, not least Max, who has a self-deprecating sense of humour; Delphine, a hospice worker, who was a loner at school, is now married to Mort, a Professor of Classics who is into drugs which bring him and Max closer. Bongani, the perfect foil for Max, and who hired himself as the producer.

Max does a lot of introspection and philosophising about life in general and there are lots of surprises in store for the podcaster, including being mugged, which gives him the status of a minor celebrity but no free publicity for Free Association because he was on a date with a bigger minor celebrity of sorts, Pixel, a brand strategist; and shocking disclosures about the relationship between Vee and Bertie.

It’s an unusual look at the world of podcasting which is a cross between radio and documentaries.
Sidley dedicates the book to the king of podcasters, Canadian Jonathan Goldstein, creator of WireTap, who writes that he wanted to make something that felt different than everything else I was hearing on radio, something that felt funny and real. Something that didn’t shy away from the big question but still had room for the smaller questions. Something that was weird and complicated in the way I knew life to be.”

Sidley has done exactly that with Free Association. Don’t miss it.