Two of South Africa’s most talented singer/songwriters with multiple no.1 radio hits have decided to come together to create a magical sunset concert on the 3 January 2018. This unique show will include Louise Carver and Ard Matthews` well-known hits plus some very special collaborations between the two of them. 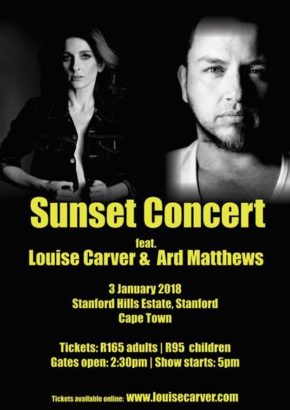 Louise Carver is known as one of South Africa`s most popular and glamorous singer-songwriters with 16 top ten radio hits, 4 international no. 1’s and11 SAMA nominations under her belt. Louise was named most stylish entertainer at the SA Style Awards [2008] and most Glamorous Woman at the 2016 Glamour awards. She is also a 46664 ambassador and an ambassador for the SPCA in Johannesburg.

She released a third single, ‘This Thing Called Love’, off her beautifully crafted 6th studio album ‘Hanging In The Void’, in August 2017. ‘This Thing Called Love’ captures the magic of when two people start falling in love. Carver explains “I wrote this song when I realized I was falling in love again. Discovering someone new, is also discovering something new in yourself and feeling childlike again is one of life’s true pleasures,” explains Carver.

Hanging In the Void’ was released in January 2017 and has received great praise from the media, including Glamour Magazine giving it a 4 Star review, saying “This sixth album is her most heartfelt yet..”

Carver says that she is looking forward to sharing the stage with Ard Matthews. “I am a huge fan of his voice, songs and performance. On top of that, Stanford Hills Estate is one of my favorite outdoor venues to perform at. My parents live in Hermanus and I am originally from the Cape so it has that extra bit of nostalgia and connection for me. Playing all my hits whilst the sun sets over the Hemel en Aarde Valley is a beautiful way to start the year.”

Over the course of the last decade and a half, one of SA`s most dynamic artists, Ard Matthews, has been honing his craft and moving people the world over. As the front man of South African band Just Jinjer, his indelible lyrics and melody arrangements led the way to the incredible success of their debut album title ‘All Comes Round’, becoming one of the biggest selling rock genre albums of all time in South Africa, achieving double platinum status in its first year, with the follow up album “Something for now” reaching the same status a year later. Matthews released his debut solo album in the winter of 2012 to critical acclaim. He is now playing regularly as a solo act, as well as still fronting the original Just Jinjer. Great news for fans: Matthews will be releasing a new album early in 2018. He is currently working on 20 new songs, of which he will pick 12 for the new album. Keep an eye on his Facebook page for updates.