The Team Spur squads got the 2017 Momentum Health Cape Pioneer Trek, presented by Biogen, off to the best possible start with stage victories for both the men’s and women’s teams.

Alan Hatherly and Matt Beers claimed the win in the UCI men’s race for Team Spur/Red-E, while Ariane Lüthi and Amy-Beth McDougall were victorious on the first stage of the race, on Sunday the 15th of October, for Team Spur/Valencia.

The 96 kilometre long stage, which challenged riders with 1 650 meters of climbing, started and finished at Milkwood Primary School, in Mossel Bay, and took in a scenic loop through ripening wheat fields and nature reserves boasting all the members of the Big Five. The day started with a 7 kilometre long neutral zone through the town and the pace stayed relatively steady for the next 28 kilometres as a big group of favourites, excluding the Team Ascendis Health duo of Robyn de Groot and Sabine Spitz, made their way towards the first serious challenge of the day.

Just before water point one, at the 30 kilometre mark, Nico Bell upped the pace on the first technical climb of the race. Bell’s acceleration split the group and soon it was only Hatherly and Beers who could hold the wheel of Bell and his NAD Pro MTB teammate, Gawie Combrink. “When NAD upped the pace we were the only other team to stay with them so I knew it would probably be between us for the stage victory” Hatherly reflected post stage.

The Spur/Red-E and NAD Pro teams where chased by the Kelly’s Bikeranch combination, of Jiri Krivanek and Marek Rauchfuss, and the KMC Fruit to Go riders, Bram Rood and Gerben Mos. The chasing teams were able to bridge across briefly in the Gondwana Private Game Reserve but could not maintain the pace of the four South Africans. Exiting Gondwana, Hatherly suffered a slow puncture but a quick wheel change at the water point, 75 kilometres into the stage, kept him within striking distance of the leaders on the road, Bell and Combrink.

The leaders came back together shortly after the water point and on the final section of gravel Hatherly and Beers made the decisive move. “We had planned to attack where the route crosses under the N2 and it worked perfectly, Gawie [Combrink] looked to be struggling so we capitalised and pushed on and once we hit the tar roads through Mossel Bay I knew we could hold them off” Beers elaborated.

The Spur/Red-E completed the stage in a time of 3 hours 35 minutes and 32 seconds, 55.91 seconds ahead of NAD Pro MTB. With six days and 457 kilometres left to race the time gap of less than a minute is hardly significant, especially considering Combrink suffered a mechanical in the closing kilometres. “I had a slow puncture which we eventually had to stop to bomb when we reached the tar. That cost us some time” Combrink explained. “But fortunately Nico [Bell] is pretty quick on the road, so we limited our losses.” 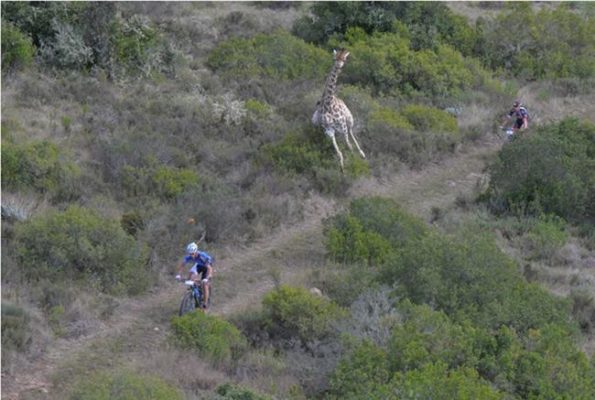 In the women’s race the Spur/Valencia team was utterly dominant as Robyn de Groot struggled with a recurrence of the injury which has hampered her season since May. Lüthi and McDougall opened a lead of five minutes by the half-way point in the stage, but as the stage neared its conclusion De Groot’s injury gradually warmed up allowing her to transfer power more effectively. 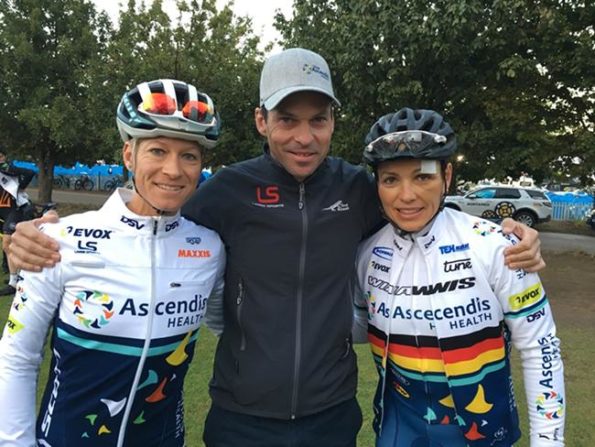 “The Cape Pioneer Trek was my first stage race and my first race on South African soil back in 2010, so it has always been special to me. I felt really good today and Amy [McDougall] and I rode well together” Lüthi said upon completing the stage victory. “We had fun out there” McDougall added, “though I did struggle a bit towards the end when my chest closed up a bit.” 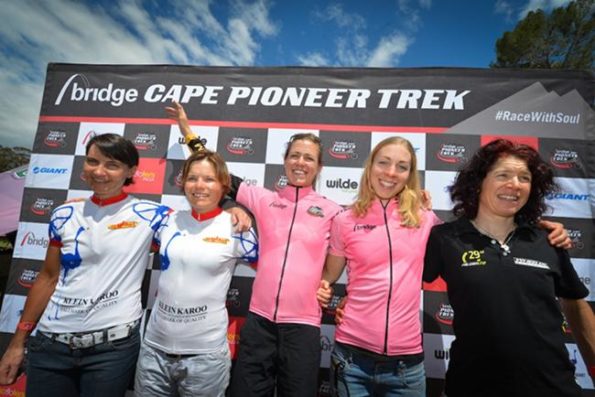 “It was a tough day for me with my injury, so we just limited the losses as best we could” De Groot reflected. Spitz was more philosophical about their chances for the remaining six days “anything can happen in mountain biking” she smiled. “Of all people I know that,” she concluded, referencing her crash at the Absa Cape Epic earlier this year.

The third women’s team was the Junto Ladies team of Nicky Giliomee and Frankie du Toit. “Today was the furthest Frankie [du Toit] has ever raced so we took it relatively easy” Giliomee said. The shorter, punchy, of stage two will better suit the young Junto women’s cross country strengths.

Monday’s second stage – of the 2017 Momentum Health Cape Pioneer Trek, presented by Biogen – is 71 kilometres long, takes in 1 550 metres of climbing, and once again loops out and back from the Milkwood Primary School. The route explores the plains to the west of Mossel Bay and takes in the famous Pinnacle Point resort and the Bergsig Game Farm.

Mountain biking fans can watch the highlights from every stage of the race on the Cape Pioneer Trek Facebook page and the Dryland Event Management YouTube Channel from 20:00, Central African Time, daily. While more information on the event is available at www.capepioneer.co.za and the stages can be followed live on event’s Twitter handle, @CapePioneerTrek.

For the full results from Stage 1 of the 2017 Momentum Health Cape Pioneer Trek, presented by Biogen, please click here.