A year after her debut single, Daar, was released HANNA BOSS is back with a brand new hit and upcoming album that is set to take the country by storm! 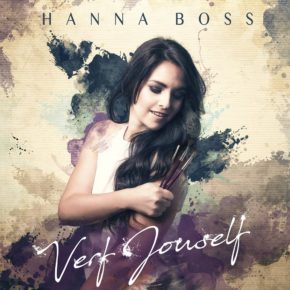 Verf Jouself is a modern Afrikaans Pop Song, with inspiring lyrics and a hint of classical music that was added to give it a more sophisticated sound.

“One of my favourite childhood stories, is Dumbo, the little elephant with the big ears. Although he was teased about his ears, his good friend – mouse – regarded them as blessings. This song was inspired by that story, in the hope that people will learn to notice their own potential and God-given talents and embrace them, in spite of what happened in the past,” the singer explains. “A few people were involved in the creation of the song. Seugne and I worked on the idea and wrote the chorus, while Elben Schutte and Hennie Kotze brought everything together and created the lyrics and verses.”

The single will not only resonate with audiences of all ages, but the catchy tune will also invite them to sing along.

Music has been a part of her life ever since she can remember. She made her singing debut at the age of three when she won the Maranata Conference’s National Singing Competition and had to perform in front of  2 000 people. Some of her favourite childhood memories include her dad playing the organ in their living room, with her sister on accordion or piano. She is also not just a pretty face and has a degree in Civil Engineering from the University of Pretoria and ended in the top three of her class with her final research project. After doing musical training at a music school in Nashville, in the USA, she realised that she wanted to turn her talent into a career. She still receives vocal lessons from the acclaimed opera singer and vocal coach, Mauri Mostert, and has also managed to proof herself as a songwriter. She wrote the lyrics and music for her first single and has also worked with, Strass, one of the country’s most respected sound engineers. Artists like Taylor Swift, Johan Vorster and Michael Jackson inspire her, because they allow listeners to see a part of who they are through their lyrics, which is something she also wants to achieve with her own music.

HANNA BOSS has managed to conquer the hearts of many Afrikaans music enthusiasts over the past few months and there is no doubt that her bubbly personality, unique approach and captivating voice will open many doors for her career in the future.