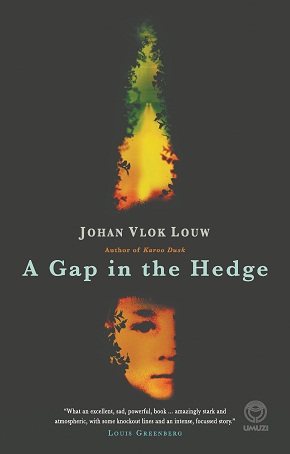 Who is Karl? It appears he doesn’t have a past or a future. But he has a lot of demons that he must confront to get a sense of who he is. Karl meets himself in a mining town where it appears everyone knows him. But he doesn’t recognise them although they have a familiar feel. He rents a dilapidated old house that talks to him and which he renovates to make it habitable.  Karl is not sure about his identity but there are numerous clues: a souped-up Ford Falcon, a Sig Sauer pistol and cash, lots of it, stuffed into a bag. Karl also knows that he exists because “his shadow over there says that he does. Look, it moves, as I do.” Karl also finds a boy’s toys in the dusty veld beyond the house. One day while Karl is on the stoep of the house, Henri, a 10-year-old boy emerges through a gap in the hedge. He lives next door with his mother who is afraid to stand up to Rhesus Mueller, his abusive father, a drug dealer who drives a beat-up green Valiant.

Karl and Henri strike up a close friendship although the boy is shy and stammers a bit. They go on hikes to a distant hill and Henri helps Karl to clean up the overgrown and unkempt garden. Karl also teaches him to shoot the Sig Sauer.

Rhesus does his drug deals in a deserted part of the mine, beyond the town’s borders. Soon a policeman, Lowe,  gets a call from two “laaitjies” who have been buying their cannabis from Rhesus. They tell the detective that they heard gunshots and a car crash. So Lowe and Detective Sergeant Elgar investigate and they find evidence: tyre marks, an indicator unit, blood smears and a dead woman, whom they dub Bougainvillea Girl. After she is identified the police head for her last known address, along muddy roads,  when a boy suddenly appears out of nowhere and leads them to his house where he shows them his dead father.

It’s about a haunted man with a past and Vlok unravels the threads in a mystical way.

Louw has an evocative way with words. You can smell the heat and the dust and you can taste the steak sizzling on the braai, cough on the fumes of the Paul Revere cigarettes that Karl smokes and you can hear the Valiant chugging into the driveway of Mueller’s house. You can picture the chaos of The Great North End Cash Store where Karl buys his supplies and which is typical of the many that were prevalent when the mining industry was booming.

A Gap In The Hedge is a compulsive read and the climax is like finding the final missing piece, that you thought was lost,  of a complicated 10 000 piece jigsaw puzzle. It’s a crime story with an unusual twist and a dash of human kindness.