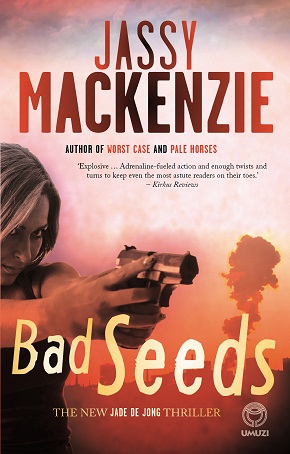 EL James, the author of 50 Shades of Grey has a lot to answer to. After her blockbuster, many female writers followed her into the soft porn field, including Jassy Mackenzie who spent time producing Soaring, Switch, Folly and Breathless, which on her website are listed as romances,  instead of doing what she does best: writing thrillers featuring the feisty Johannesburg PI Jade de Jong. We had to wait four years for Bad Seeds, the fifth book in the series. Pale Horses (2013), was published after Stolen Lives and Random Violence.  A standalone is My Brother’s Keeper.  However, Mackenzie also collaborated with James Patterson to write one of his Bookshot titles, Private Gold.

Now, in Bad Seeds, she has resurrected Jade de Jong and placed her in a story that comes straight out of today’s newspaper headlines.

Jade is hired by smooth-talking, security director, Ryan Gillespie, to investigate an attempted act of sabotage, at Inkomfe, a nuclear research centre, on the outskirts of Randfontein on the West Rand, where much of the action takes place.  Inkomfe is  based on the apartheid facility in Pelindaba – dubbed Mamba – a fitting name for a factory that could develop weapons of mass destruction, using uranium which was in plentiful supply in the old South Africa. Inkomfe is a Zulu word for the African potato which has healing properties and is one of the traditional remedies for treating HIV.

The story opens with two people in the dark of night manhandling a body into the toxic Robinson Dam which has become polluted by acid mine water. But someone is watching. (The dam was formerly a pristine area and a popular picnic site then known as Robinson Lake, which we often used to visit).

Gillespie wants Jade to track down the missing Carlos Botha, whom he believes was involved in the attempted sabotage. She finds him in a rundown Best Western motel in Randfontein, where she sees a silver Toyota Landcruiser crash into a lamp post. The female driver, later identified as Scarlett Sykes, refuses Jade’s help but a while later she is found dead in the motel room “in a sea of scarlet” along with Wouter Loodts, a former cabinet minister in the apartheid government, who was closely connected to Inkomfe, and it appears that he has been tortured.  Also missing is Lisa Marais, an activist and former security director at Inkomfe. Warrant Officer Thokoza Mweli, acting Station Commander of the Randfontein SAPS, is called to the murder scene. She’s an efficient cop and wants to be appointed officially so she knows that she must solve this case. Her other goal is to lose weight and in times of stress her ugly tabby cat, Chakalaka, is a source of comfort.

Meanwhile Botha and Jade form an uneasy relationship and go on the run when a gang of hit men arrive at the motel.  However, it seems that the hit men are always two steps ahead of Jade and Botha. As Jade digs deeper she discovers another assault is being planned on  Inkomfe and wants to stop it.

Nothing is what it seems and the lines between friend and foe are blurred.  Jade also gets help from an unexpected source, Sbusiso, a security guard at Inkomfe and his friend, Shadrack. who is dying.  Some of the characters who have featured in the other De Jong books make their appearances again: Superintendent David Patel, the man Jade hated and loved (and probably still does) who was tricked into going back  to Naisha, his pregnant wife, and their son, Kevin.  Patel believes Botha is a terrorist and that Jade’s life is in danger. Then there’s Robbie, a gangster, who helped Jade kill her father’s murderer, and pops up most unexpectedly. And I’m sure we’ll read more about Mweli in other De Jong thrillers. The De Jong series can be read separately as Mackenzie cleverly leaves clues about the personalities who have made appearances previously, among them is Jade’s mother, who was apparently a secret agent. To get the full picture it’s better to read them all.  Bad Seeds is a gripping read, which has an unexpected and explosive climax.