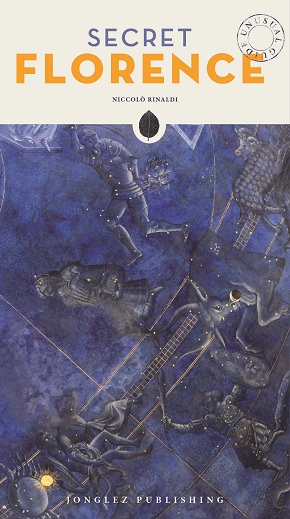 If Secret Florence had been available when I was backpacking in Europe many years ago It would have enhanced my enjoyment of the city which was once a thriving centre of arts and culture.  Apart from the imposing statue of David by artist Michelangelo and other famous works, a Florentine (not the biscuit), who befriended me showed me a few of the secret places listed in this unusual guide.

One of these was the Ximenes Sundial, the highest in the world, which is housed in the Santa Maria del Fiore cathedral, on the Piazza del Duomo. According to the guide, sundial meridians were often located in cathedrals, whose massive size increased the distance between the point  of entry of the light and the point at which it struck the ground: the greater the distance the more accurately were scientists able to calculate the angle of incidence. The sundials in cathedrals also made it possible for priests to calculate the exact date of Easter.

Another secret is the Broken Pisan columns at the Santa Maria del Fiore cathedrals. The columns on either side of the Baptistry doorway seem to have been left there by mistake. However, they were gifts from the City of Pisa to thank the Florentines for their help in the Battle of Lucca. The columns were damaged in transport but the city of Florence accepted the gift to avoid wounding Pisan sensibilities as relations between the two powers were not as cordial as they could have been.

If you’re interested in books, the Saletta Gonelli is a bibliophile’s paradise. On Via Ricosali,  it was opened in 1875 but now deals exclusively in rare books. Unknown to most people is the Salett Gonelli, an underground exhibition space which is used solely to display books, period prints and sometimes paintings. It was also the gathering point for the  Maccialoli Group of Florentine and Neapolitan painters which included Giovanni Fattori and Tito Conti, among other names.

At the Anatomical Museum of the University of Florence you can see a a pedestal made of the remains of 214 petrified organs. It was created by Girolamo Segatto. Who developed the process to preserve petrified organs. The pedestal was presented to the Duke of Tuscany who failed to appreciate the macabre gift.

Some of the other secrets include the equestrian monument to Ferdinand 1, otherwise known as the Grand Duke of Tuscany. It is at the Piazza Santissima Annunziata. On the plinth you will see what appears to be a circle dotted with balls. On closer examination it is a motif of a swarm of bees which apparently denotes power.  Cast in 1608 by Pietta Tacco, parents today test their children’s powers of observation by asking them to count the number of bees: a difficult task because of the irregular concentric arrangement of the swarm, which makes you lose concentration. Adults too, will have difficulty solving this little puzzler.

Another intriguing tale is the story of Pinocchio the puppet, which had its origins in Free Masonry. The creator of the puppet, Carlo Collodi was a Free Mason which was confirmed in 1848 by the satirical newspaper,  Il Lampione, whose mission was to “light up the darkness”.

There is also a monument to a mule at the Pitti Palace courtyard. The mule which transported materials used for the building died of exhaustion and fatigue. There is a fitting epitaph, translated from the Italian, which reads: Litters, stone and marble, wood, columns it carried, it dragged and it also transported this tombstone. The author, Rinaldi, was born in Florence in 1962 and has written a number of travel guides including on central Asia, Africa and Florentine travelers.