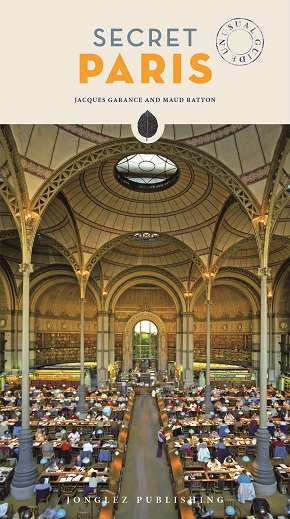 When people think of Paris the first thing that comes to mind is the iconic Eiffel Tower. But it does have some secrets connected it to it. One of these is the Eiffel window. The former headquarters of Credit Lyonnais bank which was razed by fire in 1996, has been entirely rebuilt, preserving only the Eiffel cupola and the facades which are listed as historical monuments. Although the building is not open to the public you can see the window,  created by Gustave Eiffel, the designer of the tower, from the hallway of number 18, rue du Quatre September.

At 67 rue Boileau you can visit the Eiffel Aerodynamics Laboratory. Eiffel , who, apart from being famous for the tower that bears his name, was also a pioneer in the field of aerodynamics technology. In 1920 he stipulated that laboratory be kept open as long as the wind tunnel was operational. Eiffel’s wishes were respected and the laboratory is still functioning. Later the laboratory opened its facilities to the automobile and construction industry. Which is where wind tests were carried out on the Citroen ZX for the Paris-Dakar rally and the Amiens football stadium, among others. Visitors also have the opportunity to feel the effects of the wind tunnel. You just have to ask.

Other secret places, hiding in plain sight, include the Liege Metro railway station, where the walls are clad entirely with ceramic tiles, which along with the Arts-et-Metiers station, make it the most beautiful of the city’s metro systems; the Obelix sundial which was presented to France by Mehmet Ali of Egypt in 1831 and was raised in Place de la Concorde in 1836 and has been part of the world’s largest sundial. Work started on carving the indications of the hours in to the street paving but the project was abandoned because of the 1914-1918 war. Work began in Spring 1938 but this time it was interrupted by World War II. The project was finally completed more than 50 years later, with the dials officially opened in June 1999.

Another secret is the Flower Tower in the Hauts- de-Malesherbes Gardens which were opened in 2005. The tower looks like a building of plants creating the impression of one huge flower.

Also in plain sight, or rather underground, at the Gare de Este, is the headquarters of the Association of French Railway Enthusiasts, where you can see model train layouts, all produced to scale. Members welcome visitors, according to the travel guide. There is a Portuguese Jewish Cemetery on Avenue du Flandres, set among low income housing blocks. A discreet information sign gives no indication that behind a building is a small cemetery housing a dozen tombstones and two sarcophagi bearing some inscriptions that are still legible despite the ravages of time. Under the Ancien Regime, along with Protestants, suicides and actors, Jews were not allowed to be buried in cemeteries. However, a Mr Carnot gave permission to the Jewish community in 1691 to bury their dead in a plot he owned, on condition that they did it secretly and paid him: 50 francs for an adult and 20 francs for a child. In 1780, the Sephardic Jewish community who came from Portugal bought two adjacent plots and opened the Portuguese Jewish Cemetery. It was finally abandoned in 1810, when Napoleon opened all cemeteries to the Jewish community.

This guide took more than five years to compile and the places are accessible to the public.