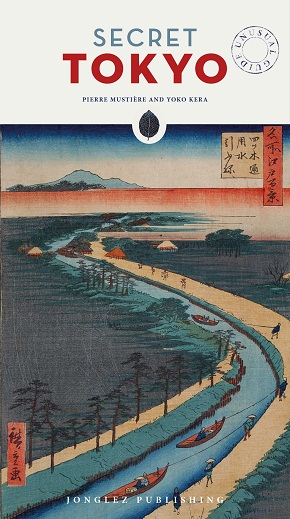 The Far East has always attracted Occidentals who have been drawn to the rituals and traditions of the Orientals. Now the husband and wife team of Mustiere and Kera who live in Tokyo show you some of their secret places, many in plain view but ignored by visitors (and residents) who are too busy visiting the popular attractions instead of the hidden places which are just as interesting, if not more so.

At Tsukudu, Chuo-ka, there is an unusual lighthouse. In reality it is a monument built over the public toilets, put up in memory of a lighthouse that was built in 1866 to guide vessels through the mouth of the Sumida. It was built by the magistrate who was in charge of the nearby labour camp. It was set up in 1790 to rehabilitate the unemployed (teach them skills and the know-how to find a job), after they were affected by the Great Tenmei famine, one of the worst in the 18th Century. Mustiere and Kera say it was revolutionary for the times when the preferred method was punishment. The shogunate didn’t hesitate to send the unemployed down the mines. It was probably easier than teaching them how to survive.

A few steps from the busy Akasaka there is an overwhelming number of statues of foxes of all shapes, sizes and gender. The presence of the foxes is down to the cult of Dakini, a Buddhist temple protective deity who, according to tradition, rides a white fox. There are even more of them at Aichi, the Tokyo branch of the Toyokowa-Inari temple. Other secrets to look out for are: an extraordinary tree that helps you quit smoking; an electronic sunflower which is 10 metres in height. The work of a Polish artist, Piotr Kowalski, it is covered with solar panels and its petals shine at night. There are plenty of other urban artworks in the area, but none as imposing as the sunflower.

Among others there is a street that gives Tokyo taxi drivers nightmares; forgotten rivers and a building that looks like a warship.

Not forgotten is the faithful dog Hachiko. There is a statue of him outside Shibuya station. (A professor of agricultural science at Tokyo university, Eizaburo Ueno, always wanted a purebred Aki. When he found Hachiko they were inseparable. Hachi used to accompany the professor to the railway station to see him off to work and he would return in the evenings to meet him. One day the professor didn’t come home: he died suddenly at the university. But Hachi continued his vigil for 10 long years by going to the station every night).

Nearby in front of the Hibiya Chanter shopping centre is a statue of Godzilla. The little statue is far from life-size but is distinctly menacing and is, the authors say, undeservedly ignored by the crowds. Underneath the beast is a single but prescient quote, translated from the Japanese: “This Godzilla is probably not the last”.

You don’t have to stray off the beaten track to see these secret places.