Join 3 innovative cellists in a concert that presents this incredible instrument in a groundbreaking new context. Featuring both traditional Classical cello’s, as well as their striking Red Electric Cello’s (with loop station thrown in), the audience will enjoy the introspection and ebullience of diverse, original works and reinterpretations of, amongst others, Vivaldi’s Double Concerto in G Minor, Leonard Cohen’s Hallelujah, Imogen Heap’s Hide and Seek and Johnny Clegg`s Scatterlings of Africa. 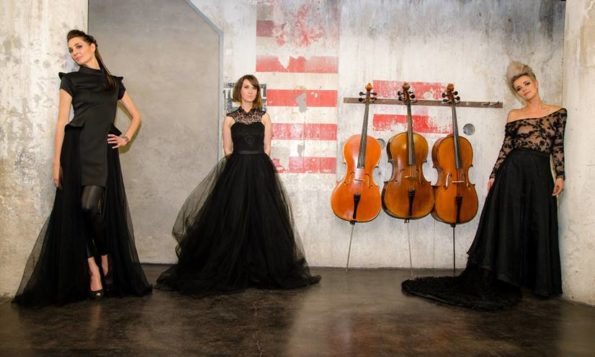 Rosanthorn have set out a compositional and technical journey to explore all that the Cello has to offer across multiple genres and timbres, with the help of South Africa’s top composers and producers. Their repertoire includes recordings and re-interpretations of varied works. Says Producer and Composer Helmut Meijer, who worked with them on their debut album: “The sound of the 3 cellos together is exquisite. This project is musically satisfying and a pleasure to record. I predict that Rosanthorn is going to be the talk of the town.”

Rosanthorn was recently invites to perform at three of the Zeitz MOCCA launches. They also recently recorded four new songs: their own arrangements of Weeping (Bright Blue), Scatterlings of Africa (Johnny Clegg), Secrets (One Republic) and Dancing on My Own (Callum Scott). These new tracks will be available on http://www.rosanthorn.bandcamp.co.za/ from 1 December.

Rosanthorn will also be featuring special guests at their Oude Libertas show: The Idols Top 100 singer Zami Mdingi, singing sensation Lize Mynardt and producer Helmut Meijer. Don`t miss this very special evening at one of the Boland`s most popular venues, with some of SA`s most talented musicians and singers.

Take a look at Rosanthorn video of “The Parting” for a glimpse of this talented trio`s musical offering: https://www.youtube.com/watch?v=-rS5fujiaF0