The Joint Operations Centre (JOC) at Eden District Municipality is still activated, and a follow-up JOC meeting will convene on 7 November 2017 at 14:00pm. 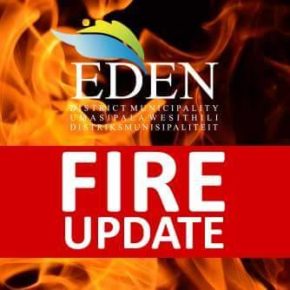 This morning the weather was not favourable for a reconnaissance flight to take place, which has made planning and coordination from the JOC a bit more complicated. Role-players that information was sourced from role-players on the ground, who include: Eden District Municipality, Farmers, SANParks, WoF, Cape Nature, MTO and PG Bison.

There are currently 13 active fires in the district progress.

A priority for the JOC today is to bomb an area North-West of the Molen River, which is expected to cause problems from Wednesday onwards if the wind picks up. The same chopper has also been permitted to bomb the De Vlught and Jonksrus areas.

Firefighters currently deployed in the district include:

The current Incident Commander is Mr Johan Brand, Eden DM Station Officer. He said that: “72 Hours of monitoring will continue to take place, which will ensure that there are preventative measures in place for any flare-ups.“

For any information regarding the status of fires within the district, contact Mr Johan Brand, Incident Commander on 061 438 9436.