Sun City: Home favourite Branden Grace produced a sizzling final-round 66 for a one-stroke victory in the Nedbank Challenge at Sun City on Sunday. 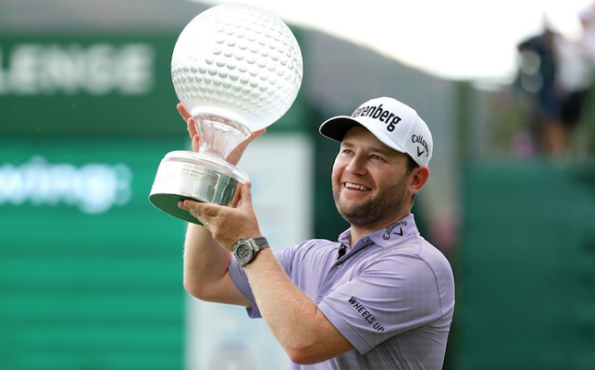 The 29-old South African delighted a huge last day crowd with a bogey-free display to capture an eighth European Tour title after finishing 11 under par overall. It was also Grace’s fourth Tour win on home soil.

Grace went into the round trailing three shots off the lead before making it a three-way tie at the top with a birdie at the 14th and then breaking clear by sinking a 40-footer for birdie at 16.

Scotland’s Scott Jamieson (70) was second at 10 under par with Frenchman Victor Dubuisson (70) third on nine-under.

England’s Tommy Fleetwood’s final-day 71 for a share of 10th place ensured the Race to Dubai title will be decided at the season-ending DP World Tour Championship, which starts on Thursday in Dubai.

Korean-American rookie Micah Shin recovered from a two-shot penalty for having too many clubs before recording his debut Asian Tour win in a playoff at the Manila Masters on Sunday.

The 20-year-old was penalised at the first hole for having 15 clubs in his bag –– one more than is allowed –– but he roared back to score 67 for 19-under-par 269, forcing the playoff with Thailand’s Arnond Vongvanij.

On the first extra hole, the par-five 18th, Shin held his nerve to drain a birdie putt from four feet and pick up the $180,000 winner’s cheque, the biggest payday of his career so far.

“I got a two-shot penalty on the opening hole for having too many clubs in my bag. But after that, I kept telling myself maybe it needed that penalty to keep me on my toes and focus more,” said Shin, according to an Asian Tour press release.

After the nightmare start to his final round, he also bogeyed the par-three third hole but then fired four birdies before the turn and another four on the back nine, including on 17 and 18.

With his win, the world number 784 — whose highest earnings so far had been $6,791 for tied 36th at this year’s Shinhan Donghae Open — moves to 14th on the Asian Tour’s order of merit.

Rickie Fowler, who is playing for the first time since helping the Americans retain the Presidents Cup trophy, has a share of the lead at PGA Tour’s rain-hit OHL Classic at 10-under 132.

World number 10 Fowler is tied with Patrick Rodgers and Patton Kizzire, who hasn’t hit a ball since Friday because of thunderstorms which have caused delays over the past two days.

Fowler finished three holes early Saturday morning and was then forced to wait out a five-hour rain delay, only to see play at the Playa del Carmen course halted by darkness.