The Northern Cape is South Africa’s largest province, with desert landscapes, wildlife and gemstones. Together with Botswana, it shares Kgalagadi Transfrontier Park, whose red sand dunes shelter lions and falcons. Wild daisies and other springtime flowers carpet the typically arid plains of Namaqualand, a region stretching into Namibia. 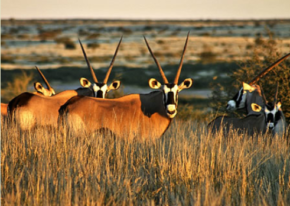 Holiday season is coming up and everyone has something in mind for a getaway. “The Northern Cape is a melting pot of activities, ranging from long road trips, safaris and game drives, hunting lodges and charming old Karoo towns,” says Jean Lambrechts, owner of Northern Cape Famous Lodges.

Northern Cape Famous Lodges is a collection of pristine Kalahari lodges that are ideally situated in the Northern Cape en route to the Kgalagadi Transfrontier Park. Lambrechts has made it his absolute priority to ensure that visitors who come to an NC Famous Lodge for their Kalahari experience have a most comfortable and memorable stay.

Kgalagadi Transfrontier Park is a vast wildlife preserve in the Kalahari Desert region of Botswana and South Africa, bordering Namibia to the west. It’s characterized by red dunes and dry rivers. Wildlife includes migrating herds of wildebeest and springbok, plus predators like raptors and black-maned Kalahari lions.

The Augrabies Fall National Park is a huge attraction to the Northern Cape, as it is widely known for its beauty and gorgeous waterfalls and breathtaking sights. And for the people who don’t like just looking at the waterfall and want to swim in amazing hot springs, Riemvasmaak offers just that.

North west of the little town of Kakamas and bordering the Augrabies National Park is the Riemvasmaak Community Conservancy, which encompasses 75 000 hectares of land between the flowing Orange and dry Molopo rivers. “Riemvasmaak hot springs are also part of the deal with natural hot springs heating the crystal clear water,” says Lambrechts.

The Koms Quiver Tree Nursery celebrates the natural abundance of the Northern Cape, stocking a wide variety of the protected species Aloe dichototum, also known as the quiver tree. This plant is one that characterises the South African landscapes, dots its horizons, and flanks its major highways. This plant is indigenous to South Africa and Namibia.The Koms is situated near Keimoes.

“Because of the Northern Cape’s sheer size, taking in and experiencing everything it has to offer on a short holiday is almost impossible,” Lambrechts says. “The key is to identify what it is you really want to do on your holiday, and identify the right venues and activities to make that a reality,” says Lambrechts.