The official trailer for ZULU WEDDING, the much anticipated romantic-comedy from producer/director, Lineo Sekeleoane, has been released.  The film will be released in cinemas nationwide on 23 February 2018 by Ster-Kinekor Entertainment. 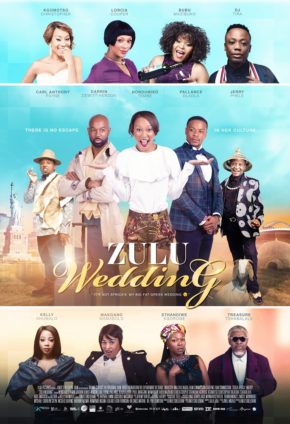 Unashamedly romantic, glamorous and hilarious all at the same time, the film pays loving tribute to the richness of African culture. It acknowledges the – sometimes schizophrenic – reality of many urban South Africans who live sophisticated, modern lives which are nonetheless shaped by their family cultures, traditions and expectations.

Feisty choreographer, Lu “Lungile” (Nondumiso Tembe), will do anything to avoid falling in love. Even more so to avoid going home to South Africa, where she’s traditionally engaged to a king. However, when she meets her soulmate Tex (Darrin Dewitt Henson), she is forced to confront the tradition she’s been running away from since the death of her parents, when she turned 18, and the ancestral debt they left her. She hatches a plan to confront the King and convince him to forget about her, but when she prevails upon handsome royal advisor Zulu (Pallance Dladla), to help her get into the Royal Compound, he proves to be a dangerously seductive charmer, one who seems to represent all the best aspects of her background.

With an effervescent screenplay by Julie Hall and stunning cinematography by award-winning Lance Gewer of Tsotsi fame, ZULU WEDDING promises a lush, playful, escapist experience which should appeal to fans of films like Happiness is a Four-letter Word and My Big Fat Greek Wedding.

This Luju Pictures Film was produced in association with Brand Contact, the DTI, NFVF and Tsoga Afrika.