Cooperation and a shared dream to ‘Build Back Better’ are key ingredients as the Garden Route recovers from the destruction caused by wildfires that tore through the region in June this year. 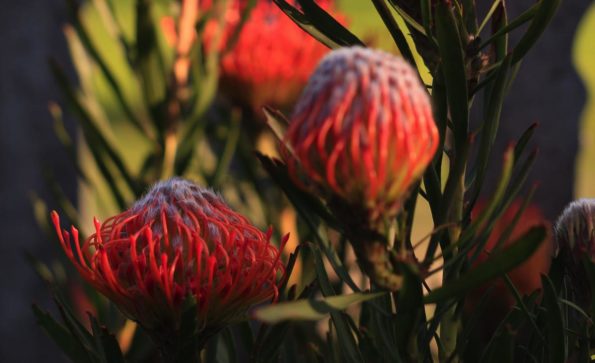 The Garden Route Rebuild Initiative was established by the premier of the Western Cape, Helen Zille, in July 2017, to coordinate the many relief and rebuild initiatives that sprang up almost overnight in the wake of the fires. Its steering committee – which meets weekly – includes representatives of the Province, the Eden District Municipality, the Knysna and Bitou Municipalities, non-government organisations, and major private donors.

The Committee’s stated purpose is to develop a long-term strategy and a shared vision for the renewal and rebuilding of the Garden Route’s economy; to coordinate all resources and efforts to achieve maximum impact; and monitor the progress of the Rebuild Initiative’s seven work streams (reconstruction, infrastructure, humanitarian aid, skills development, business support, environmental management, and funding and resources).

Each work stream is responsible for the implementation of interventions specific to its area of concern, while a project management office – which reports to the Eden, Knysna, and Bitou municipal managers – has been established to support and monitor the short- and long-term projects.

Besides providing funding to four organisations offering trauma counselling, the Department of Social Development has worked with relief organisations to determine stock levels and categories of stocks in order to determine what can and should still be distributed, and had (by 8 November) contacted 549 of 1,672 households who registered for assistance to ask what support they still need.

This work stream has thus far resolved the issue of planning approvals (owners may submit their original plans for approval, but are strongly encouraged to implement energy-efficient specifications); and identified, and sought to help resolve, the key issue of assistance for people who have to vacate their temporary accommodation in the December-January holiday period.

The Environmental Management Workstream received an initial R700,000.00 from the Eden District Municipality for erosion control in high-risk areas. This money covered the installation of about 7 kilometres of fibre rolls, and 10,000 square meters of fibre blankets in the period to September, 2017. Since existing sites require maintenance from time to time, and new erosion sites are identified after each rainfall event, this project will continue to run until the vegetation has re-established itself on the affected slopes.

This work stream has also instituted an indigenous plant hydro-seeding programme and trains landowners in erosion control, and has applied for a grant of R36,87 million from the National Disaster Management Committee for soil erosion and invasive alien plant control, and for the management of fuel load in rural and urban areas.

This work stream has implemented a project to replace damaged tourism signage; has met with focus groups and representatives of various industries to gather information about the support they need; and is in the process of drafting a Business Relief proposal.

This work stream has completed its preliminary assessments and has submitted an application to the National Disaster Management Centre for infrastructure damage incurred by the two Municipalities.

This work stream has identified thirteen areas of concern, but will initially concentrate on tourism (thirty people are currently receiving hospitality training), construction, business support, and the environment.

The Garden Route Rebuild Initiative aims to position the area a place where local and international training providers will establish themselves. Eleven such service providers have submitted course proposals thus far (November, 2017). All have been referred to the relevant SETAs for consideration.

BEGINNING OF THE SECOND PHASE

The Garden Route Rebuild Initiative entered the second phase of its work in October.

“From July to September we focussed on short-term interventions to address areas of crisis like the risk of mud-slides, dealing with the disposal of asbestos, and the need for a planning framework,” said Dr. Fast.

“We’ve now secured bridging funding for environmental projects, completed our asbestos surveys and air quality surveys in both Knysna and Bitou, finalised various needs analyses, set up our project management office, and so on – and we’ve begun a process of acquiring information and ideas from businesses and members of the public – which means that we’re now well on the way to defining our shared vision for the future of the Garden Route,” she said.

Dr. Fast paid tribute to the global management consulting firm, McKinsey, which has provided “invaluable help with the development of our strategies, and with the establishment of our project management office – all of which they’ve done at their own expense.”

“The company is working pro bono for the good of the Garden Route as its contribution to the rebuild – and we’re very grateful for that,” she said.

She pointed out that rebuilding is an issue that affects us all.

“Please share your comments and ideas with us via our social streams (info@gardenrouterebuild.co.za; @GRRebuild on Twitter; gardenrouterebuild on Facebook), and play your part as we build back better,” she said.

The GRRI will release information about a strategy planning session – which took place on Monday and Tuesday – later this week.

Please visit www.gardenrouterebuild.co.za for more about the project and its programmes.