The fourth annual Tribute Fest features a phenomenal line up, including loads of new acts to bring you 12 hours of music to pay tribute to some of the greatest musical legends of all time. 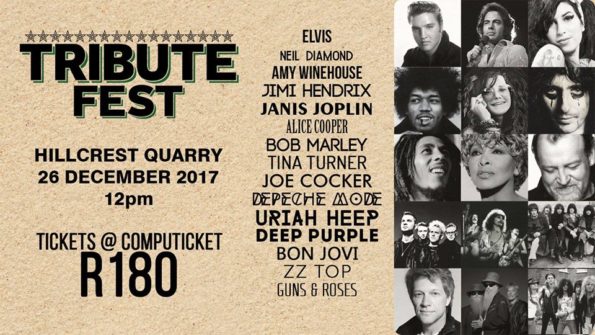 The bands that will be performing to honour the likes of Elvis, Neil Diamond, ZZTop, Depeche Mode, Joe Cocker and many more are: Mark Haze, Patrick Canovi’s “Kiss the Sky” Show Band, Music 4 the Masses, Johan Liebenberg Band, The Rivertones, James Marais and various other collaborating artists.

Patrick Canovi, who will be staging the tributes to Joe Cocker, Guns `n Roses, Amy Winehouse, Jimi Hendrix and more, started doing “Rock Legends Tribute Shows” under the name of “Patrick Canovi’s “Kiss the Sky” Show Band” back in 1994. Canovi also coaches young artists, some of who will be on stage with him at the festival. He explains that the most important thing when planning a new show, is to be certain that he finds a singer with the right voice. “I regularly get approached by singers looking for opportunities eg singer Jonathan Laing sent me a recording of himself a while back. I immediately knew that with coaching, I could turn him into Cape Town’s ‘Joe Cocker.’ Although he had the perfect voice for it, he was very inexperienced and had never sung a Joe Cocker song before.  Early in November, after only 4 months of intensive work, he did the Joe Cocker Tribute Show and receive a standing ovation. Although I also sing and do most of the singing on my current original CD entitled Patrick Canovi “Through the Years”, these days, I do more coaching, producing & directing and of course, play guitar in all the shows.”

Ramaine Barreiro-Lloyd, The Diva of Divas and the lady who puts the ‘Bling’ in the Queen of Bling, will be paying her tribute to the powerhouse Tina Turner. Asking Ramaine why covering Tina Turner, she answers: “Pretty simple actually. It’s TINA TURNER. The raspy voice and singing with complete abandonment was pretty much a no-brainer for me when I first experienced Tina Turner, and that’s exactly what she is… an experience. She somehow always manages to be very lady-like when kicking butt! I also squeeze in the Ramaine ‘devil-may-care’ sass in everything I do on stage, so I think that I’ve found a good balance between Ramaine Barreiro-Lloyd and the music legend, Miz Tina Turner. It will be an honour to return to Hillcrest Quarry this year to pay tribute to her again!”

Sean Nunan from Music 4 the Masses says: We give our audiences a performance of all the Depeche Mode songs that they remember. This band has successfully spanned 40years with well over 100 million albums sold worldwide. We perform their songs as close as possible to the originals, having sampled most of their loops and hooks and have even created our own dance remixes of some of the songs.

James Marais has developed the reputation of being South Africa’s no. 1 Elvis Presley tribute artist.  Elvis has been James’ top musical inspiration since his childhood, and he has since worked on duplicating Elvis’ singing style, famous moves on stage, as well as his iconic look. He believes in paying a respectful tribute to Elvis with regards to all aspects of the King of Rock ‘n Roll, and endeavours to give audiences an authentic Elvis experience.

Join these talented artists, as well as Mark Haze, Johan Liebenberg and The Rivertones for a fantastic showcase of the most incredible artists in the history of music.

Tickets at Computicket: R180 and kids under 12 free.