Let’s get real about SAA. In among the hype, speculation about the new CEO and board, the latest of 9 turn around plans, Gigaba’s talk of local and international strategic equity partners and of “saving SAA”, there is a blindingly obvious elephant – “SAA is broke…”

“… and to such an extent that it cannot be saved, or rescued, or privatised,” said FMF executive director Leon Louw at a media briefing today at the Free Market Foundation. “It is too late. SAA is an empty shell of debt. It has no assets worth selling, is over-manned, its aircraft are old and largely leased, every seat sold is subsidised by government and agent discounts. Even the previously respected SA Technical Services is failing. SAA is finished as a going concern with few assets, maybe R 30 billion, unknown and / or undisclosed liabilities including Comair which could be up to R 1.8 billion.

SAA is technically insolvent and the Companies Act applies to the new Board and CEO just as it does for any other private company. “Legal opinion is that the new SAA Board members are duty bound by the Act to officially inform creditors that SAA meets the laid down insolvency tests and is bankrupt. This is their individual and clear duty now, today,” said Louw. This will undoubtedly trigger default clauses in contracts, which will put SAA into liquidation or Business Rescue. However, Business Rescue can only happen if there is a reasonable case for a company to return to profitability. And it is a one way street.

“Any ‘strategic equity investor’ will be buying historical debt with no prospect of future profit. Hence business rescue is not an option. The R10 billion bailout is not enough and reflects the past,” said Louw.

The Facts: R10 billion is not enough to make SAA solvent.

– After the R10 billion, SAA is still technically insolvent by about R7 billion

– And this does not include future budgeted losses, so a minimum of another R7 billion bailout is required

– And even more will be required as SAA is making a loss of R12 million every day, R370 million per month and more than R4 billion a year.

– The R 10 billion and the additional R7 billion is all about past losses – not future funding requirements for an operational airline.

– Add future losses, say R4bn pa and SAA needs R29bn to be worth zero in 3 years

The magnitude of the losses and the scale of future funding requirements for restructuring, including replacing the antiquated aircraft fleet, makes any chance of SAA returning to profit ludicrous

Treasury has not made it clear if the R10 billion given to the banks has reduced current government guarantees or if they exist at the pre-bailout R19.1 billion. If reduced, total financial state aid to SAA is more than R40 billion. If not, it stands at R45 billion. See table 1 below. A government guarantee is a promise to pay with taxpayers’ money.

The FMF maintains that arguments for keeping SAA do not make financial or commercial sense and that the solution is to wind down SAA in a sensible, planned and open manner. The private sector will take up any slack as Comair has done on the JNB – PE route that SAA reduced this month.

Let’s get real about SAA and let the Board of directors do their fiduciary duty before any more of taxpayers’ resources are diverted from the poor to enable the rich to fly. 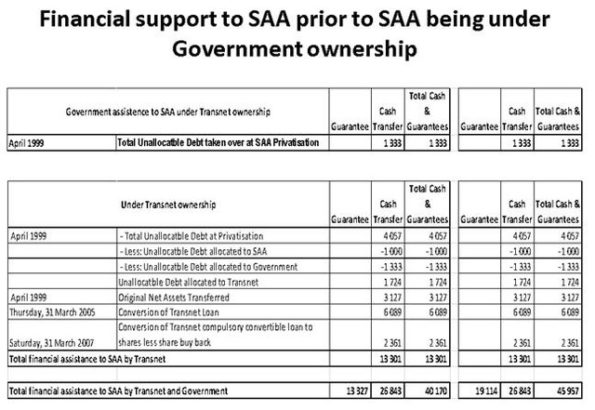 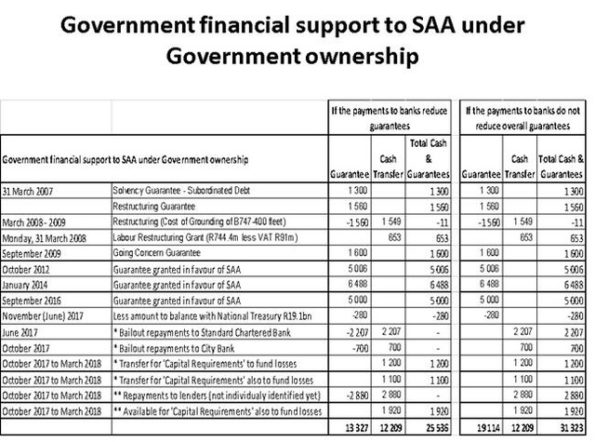