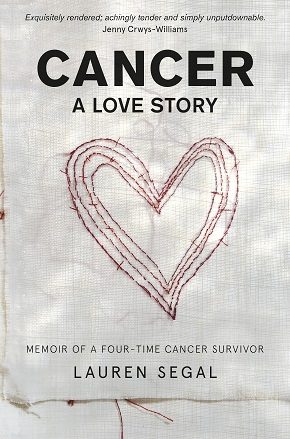 Memoir of a four-time cancer survivor

It takes a brave soul to bare your feelings to the world. This is what four-time cancer survivor, Lauren Segal has done in her book. For her it was also cathartic.

The first time Segal was diagnosed was on 28 November 1989 when she was a Wits University student living in an apartment in Yeoville, Johannesburg. It was when Rockey Street drew a whole spectrum of people to party the night away.

Segal was in the bath when she noticed blood seeping from a mole on her thigh. Something about the streaks of reds sent her to her GP who said it was a blood blister: the first in a series of misdiagnoses that led to untold terror and trauma. However, it turned out to be a Stage 3 malignant melanoma which had to be dealt with immediately. The second time was in January 2011, when her husband Jonny, a doctor delivers the bad news by phone: the lump in her breast is a Stage 0 ductal carcinoma “which is a good diagnosis if you have breast cancer”.  The third time was in June 2014 when what the radiographer thought was scar tissue from her previous surgery was malignant breast cancer. Segal got the news of the last one on September 18 2015 when a mole on her arm turned out to be cancerous.

You would expect a story like this to be mawkish and self-indulgent. It’s not: Segal tells it like it is, straight from the hip. The question she poses throughout is: “Why me?” It’s not one that can be readily answered. It’s also trite to say things happen for a reason. Although in Segal’s case it was to help women face the big C with stoicism.  As she says in her author’s notes, ” it’s not just about cancer. It’s about how one person decided to tackle an unexpected set of traumas; about seeking alternative healing therapies; about the redemptive powers of love and community; about discovering courage and different types of hope…”.

Indeed, Segal had plenty of love and support from her family and her friends and mentors: her book club; the Coffee Girls and her “anchors”, her husband Jonny, her son Josh and daughter Katya.  It was also fortunate that she was in a position to utilise the resources available to her: an excellent medical aid, psychologists and the best doctors around, except for the radiographer who misdiagnosed the scar tissue. Many other women in this country battle even to get an appointment with an oncologist at state hospitals, and they do not have the support Segal had. Breast cancer in fact kills one in eight women in South Africa.

She kept a daily diary of her experiences and the ritual proved to be a lifeline for her. She also regularly emailed her family and friends with updates on her fight with the disease. Inspired by a Talmudic sage who wrote: “It is incumbent upon you to live as if you were to die the next day”, she compiles lists of injunctions to help her to get through the regime of the cancer treatment, especially in overcoming her phobia of needles. Hovering over her shoulder is the spectre of death but she refuses to succumb and where others might feel despair, she sees hope and opportunities.

Inspired by her own journey Segal is studying part-time to become a psychoanalyst. She’s also become an advocate for breast cancer and is working closely with the Breast Health Foundation, established by Dr Carol Benn, one of her surgeons, to promote awareness and the early detection of breast cancer among women.

Thoughtfully, Segal has included a list of resources available to women who have cancer, recommended reading, audio lectures and a chapter on Chemo Tips which includes nutrition advice. There is also a Very Last List of Lessons, a valuable list, that will help you look at cancer in a new way.

Cancer: A Love Story is a searing look at one woman’s battle against a ravaging disease. The book could quite easily have drowned in a quagmire of self-pity. It doesn’t and leaves one with a sense of hope that anything can be beaten. You just have to be positive but also allow yourself time to cry if you want to. It should also be mandatory reading for men.