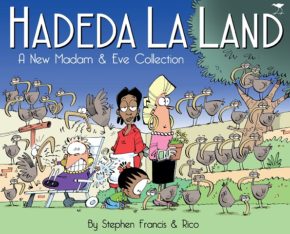 Madam & Eve is an institution in South Africa and other parts of the world, Finland, Denmark and France, where the strip also appears in national newspapers. Gwen Anderson and Eve Sisulu first made their appearance 25 years ago and they are as popular as ever, if not more so.

In Hadeda La Land, Francis and Rico, take a light-hearted look at the events that shaped the country this past year. The negotiations for coalition governments where the ANC lost in the municipal elections; State Capture; ex SABC boss, Hlaudi Motsoeneng;  Junk Status; Donald Trump: his new emojis designed by Madam & Eve; the campaign for the next president of the ANC and by extension, the country; Fake News;  the new Public Protector; and Gogo Anderson’s “revisionist” history she teaches Thandi, much to Gwen’s annoyance.

Other cartoons looked at Radical Economic Transformation; the Gupta e-mails; Ford’s mishandling of the Kuga debacle, when the SUVs caught fire and the long-running battles between Madam and Eve, with Eve usually getting the upper hand.

The cartoons may be gentle but they do leave a bite and will give you plenty of food for thought. Even if you’ve seen the work that has appeared in the Cape Times; the Star; the Herald and the Mercury, to name a few, this new annual deserves a place on your bookshelf, even if only to remind you what we’ve been through in 2017.