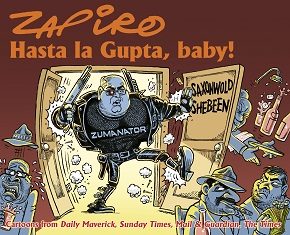 Cartoonists help us make sense of the world around us and who better to do this than Zapiro (Jonathan Shapiro). And in Hasta la Gupta, baby!, his 22nd annual collection of cartoons, which have appeared over the past year in the Sunday Times, Mail and Guardian, The Times and Daily Maverick, he does just that. In the news world dominated in South Africa by the Guptas; President Jacob Zuma; former Eskom boss Brian Molefe and the Saxonwold Shebeen; disgraced head honcho of the SABC; serial twitterer Helen Zille; new finance minister Malusi Gigaba and social development minister, Bathabile Dlamini; and Fake News, proved fertile ground for Zapiro’s barbed pen. And beyond our borders US President Donald Trump was awarded a golden showerhead; Bell Pottinger, the disgraced UK public relations company which inserted the phrase White Monopoly Capital into our national discourse, and has since closed shop, also felt Zapiro’s sharp point. Others were Grace Mugabe who, with an electric cord, assaulted a model; NPA boss, Shaun Abrahams aka Shaun the Sheep; British Prime Minister Theresa May and her handling of the Brexit Affair; and many more.

There are also some poignant cartoons that pay homage to various personalities: Struggle hero Ahmed “Kathy” Kathrada who died during the year; the reopening of the Ahmed Timol inquest, 43 years later; and a moving tribute to victims of the Marikana Massacre; ‘ Bok rugby player Joost van der Westhuizen who died of Motor Neuron Disease; and not to forget the 94 mentally ill patients (and still counting) who died when they were transferred to non-licensed facilities from the Life Esidimeni Centre in Gauteng under the watch of the then health MEC, Qedani Mahlangu. The past year was a tumultuous one and you can relive it through Zapiro’s work which will leave you crying in despair or howling with laughter at the absurdity of it all. Words are by veteran journalist and broadcaster Mike Wills, who in his usual way gets to the nub of the issue with a few well-chosen words. Hasta la Gupta, baby!, would make an ideal Christmas gift.