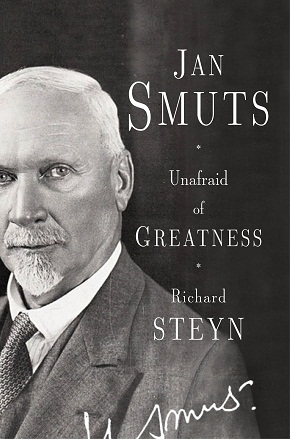 ENCA News often screens inserts of the man-in-the-street showing off their general knowledge, or lack of it, which mainly seems to be the case. Many didn’t know, for example, when asked, what our national flower is, what animal is depicted on the national team’s rugby jersey, who the new Public Protector is or what the South African cricket team is called.

If you asked people who Jan Smuts was you’d probably get a puzzled look and lots of head-scratching.

Well, Jan Christian Smuts was one of South Africa’s greatest statesmen. Smuts was an intellectual, a soldier, one of the founders of the League of Nations, and an enigma, especially when it came to race relations where he had a blind spot. Now Richard Steyn, lawyer turned journalist (he was the editor of the Star newspaper in Johannesburg), has put the spotlight on Smuts and tried to unravel the mystery of the man who has largely been ignored by today’s generation.

I don’t think there is even a plaque in Riebeek West where he was born on the family farm, Bovenplaats on May 24 (1870) and I visit that part of the world regularly, especially Riebeek Kasteel. There might be one, but I haven’t seen it. When Smuts was six the family moved to another farm, Klipfontein, about 16km away and it is where he developed a passion for nature. The young Smuts was a sickly child and first went to school, Die Ark, when he was 12 years old. The headmaster, TC Stoffberg, said he was among “the most brilliant of his pupils and one of the hardest working he had ever met”.  Smuts was a close friend of the Boer War heroes, Koos de la Rey and Denys Reitz, one of his mentors who taught him about guerrilla warfare, and he had the ear of Paul Kruger, indeed he served with distinction as a Boer War general. He was also a member of the British War Cabinet during World War 1, and although he and Lord Alfred Milner didn’t see eye-to-eye, to put it mildly, he helped his nemesis engineer the defeat of the German Kaiser, in the then South West Africa (Namibia).

Smuts was nothing if not prescient: he supported the integration of South Africa into the British Empire, not because he loved the British, but he knew that economically it made sense and he also helped found the Union of South Africa on May 31, 1910, which 100 years later went largely unmarked: it was just another day in the life of…

Smuts played a huge role in the creation of modern South Africa.

But he was a paradox and some of the decisions he made are still being felt in the country today.  Smuts didn’t do much to stop the National Party from winning in 1948. One problem was the fact that the constituencies were unfairly weighted in favour of whites. In the future the National Party would also keep the constituencies weighted in their favour. It was called gerrymandering.

Smuts failed to get to grips with the “native” question which he believed should be dealt with “some time in the future”. And that was probably the biggest stain on an otherwise brilliant career. He managed to avoid dealing with the problem mainly because Europe and America did not believe that a universal franchise for colonised people was feasible. It was only in the aftermath of World War II and the Holocaust that people were able to understand what happens when racism goes unchecked.

Steyn, clearly an admirer of the man, has done an excellent job of unravelling the enigma of Smuts, warts and all. The book in two parts: the first half is about the Life and Times, starting with the “Oubaas’s” funeral, the day before he would have turned 80, when 300 000 mourners lined the streets to pay homage to him and ending with the Last Climb when Smuts was elected Vice-Chancellor at his Alma Mater, Cambridge University.

The second half of the book looks at Smuts the man, his wife Isie, and the forces that shaped him and his beliefs. There are several black and white historical images of Smuts and the people he interacted with during his long career. There have been several books about Smuts (some of which I’ve read including Keith Hancock’s two volume work, The Sanguine Years and Fields of Force, some years ago, that I found boring and tortuous), and which Steyn refers to a few times.

Steyn has done an excellent job with Jan Smuts Unafraid of Greatness. It has been written like an in-depth news feature and  goes a long way to unravelling the paradox that Smuts was. It should be required reading at schools and universities.