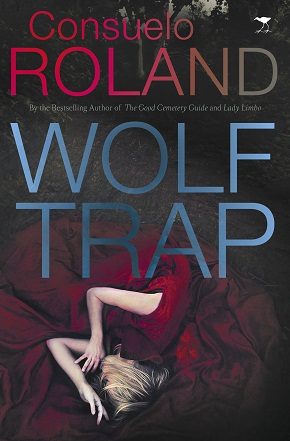 Lady Limbo (Jacana) was published in 2012 , the first of a planned trilogy featuring Paolo Dante, who is literally in limbo after a car crash in which she remembers bits and pieces of her life with her husband Daniel de Luc, aka fiction writer, Gabriel Montaigne, who vanishes while on a cruise ship heading for St Helena. Daniel has a dark past, much of which is revealed in his writing, Lady Limbo, about his transactions with women. In Lady Limbo, Paolo rescues their adopted daughter, Simone, 14, from a  porn empire run by the evil Sarrazins, Albert, now dead, and Nada, who is in prison awaiting parole.

In Wolf Trap, Montaigne is still missing and Paolo is doing her best to keep Simone safe from the criminal syndicate that has its eye on her.  But the more Paolo tries to protect her , the more Simone rebels. Simone, who uses the name Butterfly, a clear reference to John Fowles’s The Collector, joins a chat room where she links up with Diable who appears to know everything about her. Then when Simone’s surfer friend Roxy is kidnapped she is dragged back to the horror and trauma of the time she spent in the clutches of the Sarrazins.

Most of the action takes place in Camps Bay.

Paolo sees threats everywhere: the black cloaked religious fanatics that gather on the street corner;  the traffic cops including Patrick Qamarana who come to her apartment looking for Daniel; Manolo, the gigolo, who is involved with Real Men Inc (RMI), the organisation that brokers transactions for women who want perfect babies.

Then there are the good guys: “action woman” Heidi Kahn who runs security for VIPs around the globe and her brother, Nathan; the ghost of Elijah Bloom, now dead who was fixated on finding missing people through his company, Intergalactic Investigators; his assistant, Uriah; the helpful Detective Klaus Knappman; the stripper Kiki and not forgetting Truschka the cat. Roland’s characters are fully fleshed out even those who have cameo roles like Mrs Shimansky the caretaker of the apartment block where Paolo and Simone live in Camps Bay. The psychotherapist, Enid Lazarro, the red-haired midget; Paolo’s mother, Gina; Roxy’s mother, the “hippie” Georgie and her autistic son, Josh, who bonds with Simone.

The French police in the shape of Marcel Olmi are also searching for Daniel after he escaped from their clutches. They believe that his fiction has an element of truth and they think that Paolo knows where he is. Matters spiral out of control when on a trip to Paris, a belated birthday gift to the tortured teen, Simone disappears from her hotel room.  Will Paolo find the vulnerable teen? Will she be able to rescue Roxy from her captor?  Roland has an uncanny knack of making you part of the action with a few well-chosen words. You can smell Paolo’s fear when she is mugged during her morning run; you feel her terror and her vulnerability when she  thinks Simone is dead;  you’re with the police and Heidi when they close in on the paedophile and you want to cry with Paolo when she is in hospital wondering if her daughter is still alive.

Wolf Trap is a compelling and suspenseful read with more twists and turns than a roller coaster at the county fair.  And it will keep you guessing until the unexpected denouement.  Roland ends Wolf Trap on a cliff hanger with Roxy still missing and Paolo now working as a volunteer helping to track human predators through the Dark Web and the Deep Net. And what of Daniel who is still a fugitive from justice: will he give himself up?

I hope we don’t have to wait another five years for the last book in the trilogy. Although Roland cleverly weaves strands of Lady Limbo in to the Wolf Trap it is probably a good idea to read Lady Limbo first so you can get the full picture. Consuelo Roland also wrote the Good Cemetery Guide which was short-listed for the Sunday Times Fiction Prize a few years ago, and deservedly so.