The future of farming is changing and it involves breaking ground in producing organic and environmentally friendly wine, that still provides the consumer with an enjoyable wine drinking experience. 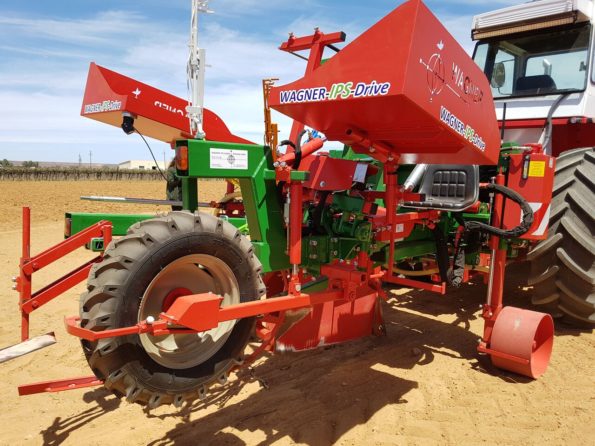 Stellar Winery broke away from the mould of conventional winemaking years ago when they decided to farm organically and to produce non-GMO, vegan friendly, gluten free wines that are fair trade certified according to Fair for Life regulations. Now, they have again changed the course of their future by purchasing a brand new Wagner-IPS-Drive GPS planter from Wagner Pflanzen-Technik GmbH in Germany – a first for Africa – in order to move into high density plantations.

“High density planting ensures fewer kilograms per vine, which delivers better quality grapes. We will stick to 2 to 4 kilograms of grapes per vine, and for our mid-range wines, we will keep the yield between 3 and 4 kilograms. Because we farm organically, we have to use more of our land surface to ensure optimal usage of resources,” Wilhelm Steenkamp, viticulturist at Stellar Winery, which is situated outside Vredendal, explains.

According to Willem Rossouw, managing director of Stellar Winery, the reason for high density planting and the acquiring of the specialised equipment is to ensure better quality grapes, delivering better value for Stellar customers.

“With special reference to the red wine category, South Africa, and the Olifants river area in particular, is far behind the rest of the world in terms of quality,” Willem explains.

The advantage of the planter, according to Wilhelm, is that it puts the vines very deep in the ground, with its roots firmly placed downwards, so that it can survive a lot longer without water. At the moment they are busy planting with the Wagner-IPS-Drive GPS planter with the aid of only 5 or 6 people. If all goes well, Stellar Winery aims to plant between 8000 and 10 000 vines per day.

“What we are going to do here is to only irrigate once every three to four weeks, just to establish the vines for the first year. With this planter, the vines will also be more established, all the vine’s graft joints will be the same height, and they will be in a 100% straight, horizontal row. This makes it even more effective in terms of our mechanical farming practices,” Wilhelm explains.

Labourers can then simply comb the vineyards checking for small details and performing tasks like breaking the leaves, spacing the shoots, and breaking out the clusters of grapes.

Acquiring new equipment to improve the way they do business and approach farming is not a foreign concept for Stellar Winery. They also make use of the Pellenc Optimum in their vineyards and according to Wilhelm it harvests 99.9% pure grapes, which leaves them with a much higher quality product for the winemaking process.

According to Willem, one of the factors impacting the quality of red wine grapes is that the estate cellars sort the grape bunches before destemming. Afterwards the non-grape parts are being removed manually. They then crush the grapes just before it enters the red wine fermentation tank. “It’s a time consuming process sorting the grapes in this manner with 6 to 8 people, especially as 12 tons are handled a day. This process also results in overoxidation of the berries and juice loss,” Willem explains. He adds that it is accepted worldwide that more than 4 kilograms per vine can not consistently deliver above average wines. “For a bigger private cellar such as ourselves, we need to accomplish this at night time to minimise oxidation and keep the yield at the 4 kilogram mark,” says Willem.

“The Pellenc 755 with its Tool Carrier also does the work at double the speed of a normal tractor,” Wilhelm explains and adds that with the Clemens Shovel and Brushcutter they have improved control over the weeds which grow in the vineyards. Wilhem adds that the Clemens Leaf Remover aids light exposure in the vineyards by removing leaves at a rapid rate.

When Stellar Winery first started using the GPS planter, Wagner was there to lend a helping hand. Phillip Fürst from Wagner Pflanzen-Technik GMBH along with other technicians and technical support helped Wilhelm and his team start using this machine and also witnessed the first vines planted in the soil.

“We build GPS controlled planting machines, especially for wine but also for all kinds of farming varieties you want to grow in a row. This is the first Wagner-IPS-Drive planting machine in Africa.

“We just started with the first vines, and it works perfectly. Because of the GPS control, you can work very precisely,” he explains.

According to Anne-Sophie Wagner, daughter of wine-grower and grafter Jürgen Wagner, her father implemented a visionary idea in 1975: the first machines for automatically grafting and precise planting. Today she, along with her brother Philipp Wagner, continues to manage the company in the spirit of her father.

“For the first time ever, vines need no longer be placed manually into the soil,” she explains, and adds that today Wagner is revered in more than 50 countries for innovations like film layer, breaker plough or sorting system machines for vines.

Anne-Sophie says her father disliked the practice of planting by shovel and hand. So he developed the first planting machine nearly 35 years ago. For straight lines he started initially with wire guiding, followed by laser control and for around 10 years the satellite controlled planting machines.

“But the company’s pioneering spirit is still unbroken: The newest GPS-guided planting machines operate with in-house developed software, all managed from the headquarters in Friedelsheim,” says Anne-Sophie.

The satellite controlled Wagner planting machine “IPS-Drive” was introduced to the market in 2005.

“It’s a great pleasure for us to work together with Stellar Winery,” says Anne-Sophie. “Stellar Winery’s familiar atmosphere and their ecological philosophy are in line with the philosophy of Wagner.”

By acquiring the specialised Pellenc equipment, Stellar Winery can accurately measure actual block size information and identify inadequate trellising systems, irrigation systems, quality pruning systems, leaf wire support systems and management systems of the blocks. According to Willem, this has resulted in full control over the harvesting process and timing, getting clean cool grapes into the cellar, maximising quality of the organic grapes, minimising damage to destemmers and pumps by leaving the MOG on the farms, and saving harvest cost on the farms by using the cleaning and sorting system on the harvesting machine.

“If you take all of the above into consideration, it is actually a no brainer that we had to purchase the Pellenc harvester and adapt our plantings to higher density,” Willem explains.

Willem says it will take about 15 years to convert all their independent farms that provide Stellar Winery with organic grapes to the higher density growing method.

“We had to start with this as soon as possible after we realised the predicament which we found ourselves in. This will ensure that we stay competitive and profitable in the international wine market for the long term,” says Willem and adds that the deciduous fruit industry started to do high density fruit planting more than 25 years ago.

“The wine industry is just now starting to catch up with high density planting,” says Willem.

The future is indeed green.

For more exciting news and information about Stellar Winery, their wine and their journey, visit their website:  http://stellarorganics.co.za/