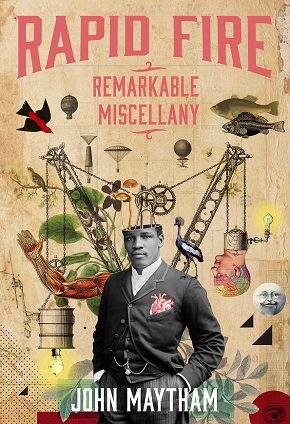 Test the Team was a popular quiz show on Springbok Radio every Sunday between 1954 and 1985. The team, dubbed the three “wise men”,  consisted of Arthur Bleksley, Grant Loudon and Eric Rosenthal with Dewar McCormack as the quizmaster.  As I recall,  the quiz whizzes weren’t often stumped: listeners could ask them the most arcane questions and they would answer them. This was in the days before Google, the internet and cellphones.

567 talk show host, John Maytham’s Rapid Fire quiz insert aired in the afternoons is similar. CapeTalk listeners phone in to pose their question and Maytham and his team, sometimes , as he admits, with the help of Google, tries to answer them.  The winner is the listener who asks the most interesting question, even if the team gets the answer wrong. Which is not often. And one of the questions also stumped the Test the Team team. It was, “Give me a six letter word of which each alternate letter is the same letter”. It’s not clear from the book if the Rapid Fire team had the answer, but the word, syzygy, is the straight line configuration of three celestial bodies like the sun, the earth and the moon in a gravitational system, foxed Arthur Bleksley, a well-known scientist.

Maytham says he has  a magpie memory: the ability to recall bits and pieces of interesting information. He has been blessed with two genetic gifts: the ability to read more quickly than most people and a memory that is keener than average. So perhaps he doesn’t always use Google to arrive at the answer.

Now he has compiled a book of the questions, put to him by listeners,  with the answers.

Rapid Fire is divided into 18 categories: Animal; Body Parts; Connections; Food and Drink; Fun with Flags; History; Life and Death; Medicine; Popular Culture; Red Herrings; Soldiers and Spies; Sport; Strange Nature; Strange Science; Stuff; Where in the World?; Word Origins and Word Play, just as diverse as the questions listeners have asked. Here are just a few:  How Do You Have Sex In Space?; Why is Roulette known as the Devil’s Game; Can a Vegan Eat a Fig?; What Colour are Polar Bears?” Who Was Vesna Vulovic?  You’ll have great fun paging through Rapid Fire searching for the answers.  You’ll want to dip into it again and again. It is highly entertaining with touches of Maytham’s wry humour.