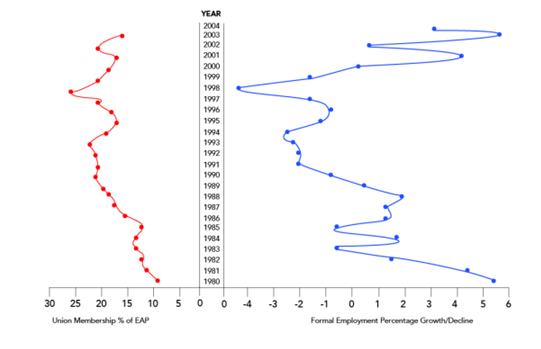 It is uncanny how closely these two curves are aligned. Of course, all this graph illustrates is that there is a correlation between union density and the growth rate of formal employment in South Africa. It does not mean that higher union density causes the employment growth rate to decline. 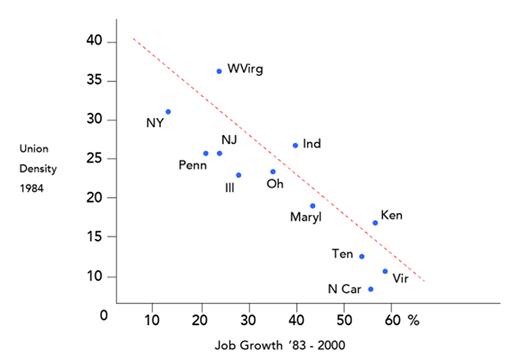 Another way of looking at this is to divide South Africa into industries that are potentially sensitive to union density, and to compare their results. The following graph compares COSATU membership expressed as a percentage of formal employment in 2000 with the percentage employment growth/decline in the mining, manufacturing, transport, trade, finance and construction industries in the period 2001-2006. 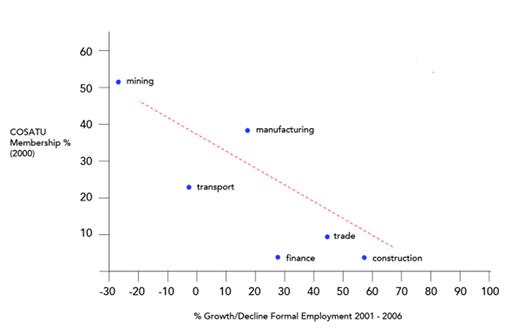 Here, the union-membership percentages relate to 2000, while the change in employment relates to the six-year period after that. Once more, this is consistent with the notion that union density suppresses employment growth.

The following graph shows a different period (2000-2012) and uses union membership of all unions (not just COSATU). The results are similar: 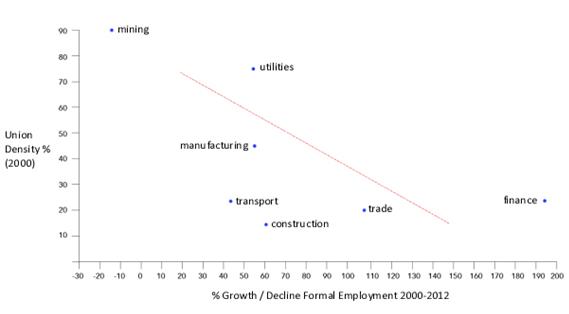 Research in the US also confirms the relationship between high union density and low employment growth. The Heritage Foundation examined changes in employment in unionised and non-unionised plants in the US manufacturing industry over the period 1977-2008.2 Over that period, employment in manufacturing in non-unionised plants grew from 12.5 million to 13.3 million, while in union plants it declined from 7.5 million to 1.9 million.

In 1947, the United States passed the Taft-Hartley Act, which affirms the right of states to enact right-to-work laws. Under these laws, employees in unionised workplaces may not be compelled to join a union or pay for any part of the cost of union representation. In anticipation of Michigan’s adoption of right-to-work laws in 2013, the Mackinac Center for Public Policy in Michigan examined the economic effects of right-to-work status. Here are some of its most striking findings:

Trade-union protection by law is a scandalous form of rent-seeking. Unions, aided by legislative protection, raise the cost of labour. In this country, with its growing army of unemployed people, there is simply no justification for this travesty to continue.

2        James Sherk, ‘What unions do: What labor unions do and how it affects the economy’, Heritage Foundation, 21 May 2009, available at http://www.heritage.org/jobs-and-labor/report/what-unions-do-how-labor-unions-affect-jobs-and-the-economy (last accessed 11 April 2017).

Frans Rautenbach, author of South Africa Can Work, is a labour lawyer

Frans Rautenbach, author of South Africa Can Work, is a Cape Town labour lawyer with ample experience of legal reform work, having consulted to the governments of Uganda and Tanzania on reform of labour legislation, licensing laws and business start-up procedures. He is a published author about legal reform, management systems and labour law.