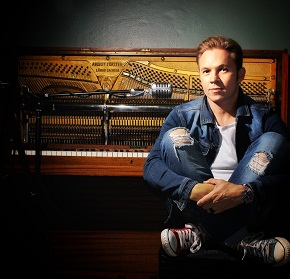 One of the songs that is included on the album, is Halleluja Kersfees, which captures the romantic atmosphere of the festive season perfectly.

The song, in a way, represents a road trip – through the Karoo to Cape Town – and was written by the artist himself. “The song is about the memories of making Christmas decorations from shells that we found on Melkbos’s beach, about dancing in Kalkbaai and feeling like a tourist at the Waterfront. It is about my romantic memories of Christmas in Cape Town”, says Jak.

Jak is also launching a brand new initiative this year, in association with Die Blou Hond theatre and Caring Daisies, called “Geel jou hart vir liefde”. The project features a series of six exclusive concerts, which will be held at Die Blou Hond theatre from 12 – 17 December 2017. Jak de Priester is the artist and these exclusive shows will only be seen at Die Blou Hond. This year’s show will showcase higlights from his career over the past fifteen years, including a song or two from his 2008 De Priester en een Kerkorrel concert, as well as some of his biggest hits, a little bit of comedy, a Christmas carol or two and lots more. The goal is to turn the show into an annual initiative in an attempt to bring sunshine to the lives of people and animals. It is a week of charity. “This year we will be focussing on animals and our mission is to collect food and blankets for the hundreds of cats and dogs, which are abandoned and neglected by humanity”, Jak explains.

This means, that during the month of December, Die Blou Hond is going… YELLOW! This yellow Christmas tree and a yellow show, promises to end 2017 on a high note and to put everyone in a merry spirit this Christmas holiday.

Jak adds that they would really like to make this an annual initiative, but that they cannot do it without the support of the public. “There is going to be six evenings, 170 chairs per show… and we would like to invite the public or businesses to book a table or two! There are no limitations. All we are asking for, is any donation in the form of pet blankets or food, to put under the yellow Christmas tree.”

A ticket, which includes a buffet dinner and decadent dessert nibbles, costs R330 per person and bookings can be made at:

Caring Daisies will be responsible for distributing funds and other donation to the correct institutions.

Help us to help animals… Next year ‘Geel jou hart vir liefde’ will be supporting another charity. This is our way of spreading some sunshine, giving back and making a BIG difference!