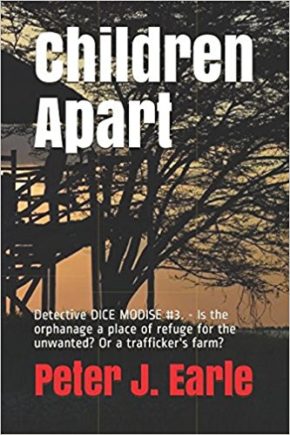 Children Apart is the third thriller featuring Botswana detective, Sergeant Dice Modise. While Dice is away in Bulawayo fetching Joy, the woman he plans to marry, Brenda Molefe, an old school friend and now a popular pop star who is in Maun for a concert, goes to the nearby orphanage, Bana Ba Noka, in search of the son her mother forced her to give up for adoption about 15 years ago. But the woman, Betty-Lou Schultz, who owns Bana Ba Noka in partnership with an Indian doctor, Mark Gupta, refuses to give her any details, citing confidentiality, and they have a row.

Molefe goes to the Maun police station in search of Dice. Instead Superintendent Olihele Batubangwe listens to her story and gives Dice a letter she wrote when he returns from the family negotiations to marry Joyce, the mother of his son, now 10 months old, and Merrie, who he is planning to adopt. Dice met Joy, a Zimbabwean, when she was working illegally at a dagga factory (Medicinal Purposes Only). However,  talks don’t go smoothly as his prospective father-in-law is a traditionalist.

Back home in Maun Super Batu tells him about the visit. And Dice says he will look into although he is busy with another case, trying to catch the elusive Riverside Robber who always wears a balaclava even in the searing Botswana heat.

Dice goes to the orphanage on the pretext of enquiring about the adoption process. At Bana Ba Noka he is greeted by an attractive Indian nurse, Hita Mehta, a South African from Lenasia who has been working there for five years. But Ms Schultz is away and Hita promises to pass on the message. She doesn’t. On her regular shopping trip to buy groceries for the orphanage she “bumps” into Dice’s friend, safari guide Nick Cahill and there is an immediate attraction.

When Dice goes back to the orphanage Ms Schultz is very evasive and the detective’s suspicions are aroused and once he gets his teeth into something he’s like a dog with a bone. Meanwhile he and his team are still on the trail of the Riverside Robber. To compound matters one of his victims is found dead. Brenda is stabbed to death and the temporary receptionist at the orphanage, Mary Lefhoko is missing. The Riverside Robber has stolen a laptop with valuable information and sold it to a fence. However, the owners want it back and will go to any lengths to recover it, even murder.

However, Dice, who for obvious reasons is known as “Squeaky Clean” by his colleagues finds himself in a quandary when new evidence emerges about the Riverside Robber, now known as Shadu, who saves Joy and Dice from certain death. Shadu is also linked to Joy’s past.

Children Apart is as topical as today’s headlines: child trafficking and organ donors. There’s a twist and plenty of surprises.

Many of the characters that appeared in the first two Dice Modise books, Hunter’s Venom and Medicinal Purposes Only (reviewed) are back.

Earle is a good storyteller: he is familiar with Botswana and it shows in his description of the country and its people.

Children Apart will grip you from page 1.  It is available on Amazon.