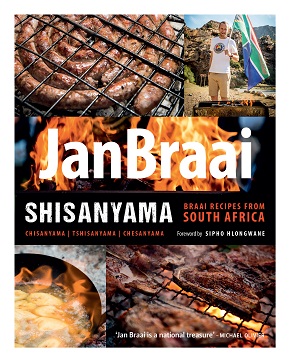 Jan Scannel, better known as Jan Braai , the man who almost single-handedly turned Heritage Day (September 24) in to National Braai Day, believes the one thing that can unite South Africans is the braai. And just in time for the holiday season he has produced another braai cook book. Jan Braai asked South Africans to send him their favourite recipes and Shisanyama is the result.

Although he has added his own twist to some he has tested them all to make sure they work: among the criteria he uses for all his dishes are: Is it easy? Is it easy to read? Does it work? And it is easy to serve? If the answer is yes to these questions it gets the “JanBraai” stamp of approval. Jan Braai notes that it was hard work selecting the recipes that were submitted to him: some changes were small and reflect the recipe as it was sent to him. Other changes were large and where possible he has given credit to the people who rallied to his braai call.

Some of the more interesting dishes include Brandy and Cola Beef Short Ribs. The beef short ribs which are sold in supermarkets are not riblets but meat cut across the grain and rib bones from that area of the carcass. If you want the riblets you will have to ask a speciality butcher. Either way beef short ribs are usually tough as nails so you would have to put them in a potjie first and then on the grid.

Another one is Thokoza Park Chuck supplied by Scannel’s mates Nathi and Jay from Soweto who use chicken spice to give the meat a bit of a kick. You braai chuck steak like a lamb chop. It is generously marbled with fat and some of it must sizzle and get crisp.

The recipe for Biltong Steak comes from Craig Colesky. The Coleskys are synonymous with meat in the Eastern Cape and it is their family recipe. You make a marinade with biltong spice, marinate it for 24 hours, and on the day of the braai put it on the grid. You can use rump or sirloin.

In the chapter on Seafood you can learn how to braai a trout; make Red Curried Mussels or a Seafood Couscous Paella.

There are seven different recipes for lamb and the one I’m going to try at my next braai is the Lamb Rib Roll, deboned with the flank attached. It’s easier to ask your butcher to debone it for you. Then you stuff it with among other things feta cheese, sundried tomatoes in oil and one tot of capers. Other lamb dishes you can try are Bloemfontein Lamb Curry from Harri who gave it to Ryno who uses it in potjiekos competitions; braaing lamb rib: there’s an art to it, and Skilpadjies.

Awesome Stuff includes salads, soups; Cape-style braai broodjie and Putu Pap, the trick is in managing the water to maize ratio and using a two-tined fork. There’s another hint but you’ll have to buy Shisanyama to find out what it is.

There are chicken dishes: Stuffed Baby Chickens; Peri Peri Chicken and a Christmas Chicken from Lise in Paarl which she originally developed for a turkey. And you try it at any time, not only on Christmas Day.

You can make Side Dishes for your braai.  Some are: Pot-roasted Buns; Aubergine Skewers and Umngqusho, samp mielies and one of Nelson Mandela’s favourite dish. There are pork recipes: Pork Chop Ravioli and Bacon Bundles using fresh asparagus, green beans and long-stemmed broccoli.

Then to round off your braai there’s a range of Desserts that will satisfy everyone’s sweet tooth. Try Caramel Flambe Bananas;  Mosbolletjies with Braaied Banana Butter and a Bread and Butter Pudding using one tin of condensed milk. This recipe came from Christi and is best done in a potjie.

The colourful images in Shisanyama are also by Jan Scannel. Shisanyama gets a hot 10/10 and it will be a useful addition to your cookery collection. It will be well used, guaranteed.

As blogger Sipho Hlongwane points out in his foreword, no matter what you call it, chisa nyama. Ishisanyama or ukuwosa inyama (Zulu for coming together), every South African knows what a braai is: it’s where people gather to gossip, enjoy each other’s company, argue, laugh (and above all braai).