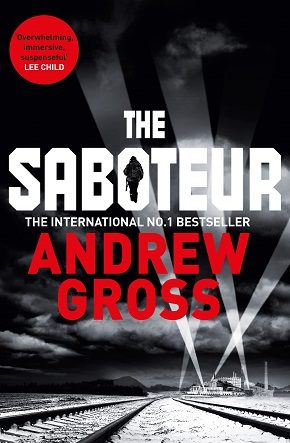 The Saboteur follows the same formula as The One Man (reviewed, The Gremlin, January 4, 2017). In The One Man, an agent, Nathan Blum, has to rescue Professor Alfred Mendl, a scientist, from Auschwitz. Mendl has the key formula that will help the Allies to build the atomic bomb and bring World War II to an end. The Saboteur centres on one man, Kurt Nordstrum, who with the help of his team, is determined to stop the Nazis from producing “heavy water” at their Norwegian factory. The Nazis want to be the first to build “the bomb” that will determine the outcome of World War II. Nordstrum, is quite happy living in Oslo until his fiancée, is murdered by the Nazis as part of their 40-1 policy of retaliation.

Nordstrum and his friend, Jens, join the Resistance where they make their mark but their aim is to reach England where the Free Norwegian Army, which “has a nice ring to it”, is being formed. The Resistance is not so resistant and is falling apart.  Then as fate would have it an old school friend, engineer Einar Skinnarland, gives a microfilm to Nordstrum to be delivered to Lief Tronstad, a former director of the Norsk Hydro factory, who is now an officer in the Free Norwegian Army in England.  The only obstacle is that England is almost  2 000km away.

So Nordstrum hatches a plan to hijack a ship, the Galtesund, which takes them to Scotland. They deliver the microfilm and then are recruited into the Special Operations Executive (SOE) and given extensive SAS training in the Scottish Highlands to prepare them for their mission to destroy the Norsk Hydro Factory in an inaccessible part of Norway.  Nordstrum and his mates, however, grew up in the snowbound area:  they used to ski and hunt there: and know it intimately.

Operation Gunnerside, composed of Norwegians, one of whom is an expat living in America, is ready to go. Instead a unit of British paratroopers is dispatched but the 40-strong members die before they can fire a shot in anger.  The SOE finally gives the Norwegians the green light to attack the factory. Without going into too much detail the team face many obstacles. Not least the Quislings, police who turned traitor and gave their allegiance to Vidkun Quisling, a military man – a Nazi sympathiser and collaborator who was nominally the head of the Norwegian government.

Then just before D-Day, Nordstrum meets the love of his life, Natalie, who is going with her grandfather, a prominent Austrian musician, to give a concert for the Nazis at a town near the Norsk Hydro. Nordstrum is torn between his duty to Norway and his feelings for Natalie who will be aboard the Hydro ferry which is their target. Nordstrum faces a dilemma. Should he warn her about the impending sinking of the ferry and risk everything he and his team worked so hard to bring to fruition?

According to Gross’s notes The Saboteur is based on fact. British intelligence uncovered that the Nazis were using a fertiliser factory in Vermork, Norway to produce deuterium oxide or heavy water to make the A-Bomb a reality. The characters that feature in the novel are based on real people. The protagonist Nordstrum is drawn from Kurt Haukelid.  A film of the raid, The Heroes of Telemark starring Kirk Douglas, was also produced about 40 years ago.

The Saboteur is not a fast-paced thriller although it does have its moments. You’ll enjoy it if you like reading a save-the-world kind of tale.  But it’s not his best work, in my opinion.  Gross’s other books include 15 Seconds; No Way Back and Eyes Wide Open.