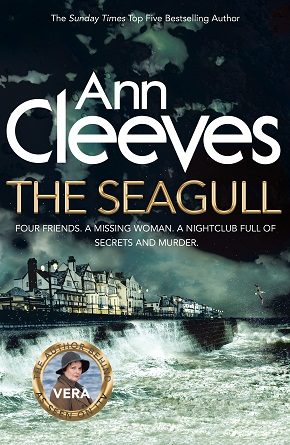 A cold case drags the Northumbrian Detective,  Inspector Vera Stanhope, back to her past. Reluctantly, on the instructions of her new boss, Watkins, she agrees to address an outreach meeting at Warkworth Prison to speak to prisoners in the EDW (elderly and disabled wing). There she comes face-to-face with a corrupt cop, former Superintendent John Brace, a member of her father, Hector’s “Gang of Four”, including a man, they called the “Prof”. Their shared interest? Stealing rare birds’ eggs and selling them to collectors.

Brace knows where one of the gang members, Robbie Marshall, who has been missing for 20 years, is buried. But in return the DI must keep an eye on his “adopted” daughter, Patty and her three “bairns”, now divorced from her abusive husband, Gary Keane, an IT whizz, who hangs on the fringes of the Northumberland crime mob. When Vera and her team visit the burial site they find another skeleton, believed to be Mary-Frances Lascuola, a sex worker with whom Brace had an affair, resulting in the birth of Patty.  The search for the woman’s identity takes them back to the 1990s and the Seagull, an elegant nightclub on the waterfront at Whitley Bay, which was razed by fire.  The Seagull was owned by Alec Sinclair, a big time gangster. Now his son, Gus, a “pillar” of society has plans to restore the area to its former glory. Hovering on the edges is the man known only as  the Professor.

The search for identity of the woman takes Vera and her team, Joe, Holly and Charlie into the dark underbelly of Whitley Bay and St Mary’s Island: human trafficking, the illegal trade in birds, corruption, drugs and family relationships. Readers will also find out a bit more about Vera’s past and how it shaped her and her future.  The authenticity of the setting for The Seagull stems from the fact that Cleeves lives in Whitley, in the north east of England.

The Seagull, the eighth Stanhope book, is full of atmosphere, surprises and red herrings that will keep you guessing until the fiery climax. Brenda Blethyn stars as Vera Stanhope in the DSTV series, Vera, and Cleeves is author of the best-selling Shetland books.