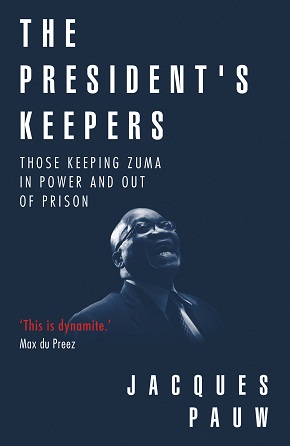 It is hard to credit that a book that may have the same effect as Watergate and Infogate which led to the downfall of President Richard Nixon and South African Prime Minister BJ Vorster respectively, could emanate from Riebeek Kasteel, a quiet enclave in the Swartland, where not much happens, except on weekends, when it literally buzzes.

But that’s where Pauw lives with his wife Sam Rogers who own a restaurant, the Red Tin Roof.

It all began in Moscow after Pauw received a tip-off that a former South African spy, Paul Engelke, living there would talk to him. When Pauw called him, Engelke agreed to a meeting but made it clear that he was bound by the State Security Agency’s Intelligence Act and would not break that confidentiality agreement. Pauw just wanted confirmation about the activities of Arthur Fraser, the new director general in the SSA.

And so started his investigation into the secrets of the Jacob Zuma government and the cabal, a shadow cabinet that was pulling the strings behind the scenes, and eliminating his enemies, keeping the already compromised president in power. The leaked Gupta emails didn’t do much to enhance his probity either.

The rot is deep and the cabal has captured key state institutions, among them the South African Revenue Service, a vital cog in the functioning of the economy. It was once a beacon and used by universities throughout the word as an example of good governance. What is especially revealing is the role played by the Sunday Times in exposing the “rogue unit” within the SARS. It later proved to be a fabrication. The key players, among them former editor, Phylicia Oppelt, and some of the reporters, have disappeared in to the sunset. Piet Rampedi, however, started his own newspaper, the African Times, and he has already been chastised by the Press Ombudsman.

Pauw explains how the tobacco smuggling “gangstas”, which cost the fiscus millions, went to work enriching themselves and the members of the Zuma clan, including giving their support to the president-in-waiting Nkosazana Dlamini-Zuma, ex-wife of Jacob Zuma, who has strenuously denied links to one of them, Adriano Mazzotti, despite being photographed with him.

Corruption appears to be endemic under Zuma and Pauw runs the gamut of alphabet: from A when the new Public Protector, Busisiwe  Mkhwebane, a former SSA employee, who overstepped the boundaries when she ordered the Reserve Bank to amend its constitution following her investigation into the bailout of Absa during the apartheid era, to the Zumas including Duduzane, Edward and Khulubuse, all of whom have made the newspaper headlines for the wrong reasons.

Nkandla was in reality small potatoes in comparison to the incidents of malfeasance which are revealed in The President’s Keepers.

As far as I recall there have been eight impeachment motions against Jacob Zuma, which proved futile.

While the ANC’s National Executive Committee failed to recall him, as they did former president Thabo Mbeki, even when Zuma was found guilty of violating the Constitution and his Oath of Office, there’s a reason, linked to Zuma’s past as a terrorist.

In my opinion, perhaps the answer is in Zuma’s days as the ANC’s head of  intelligence.  Not much is known about his role: he says it was ANC policy and not his to disclose. However, he was apparently complicit in the deaths of MK cadres Thami Zulu and Cyril Raymond, their code names. Zuma was also the commander of the “dreaded Mbokodo, the “stone that crushes” in Xhosa, according to Pauw, who writes that “his leadership of Mbokodo demonstrates just how far he will go in neutralising traitors and incapacitating opponents”.

But here’s what I think. Social development minister Bathabile Dlamini, referred to “smallanyana skeletons”, during the social grants debacle and her role in the Travelgate scandal when she pleaded guilty to one count of fraud (R254 000) service benefits/mileage claims) and was sentenced to a fine of R120 000.  Now she’s a cabinet minister and a Zuma acolyte. Go figure.

Zuma might not be an educated man with a string of letters behind his name but he is a street fighter and master chess player. He knows where all the skeletons are buried. And he would not be afraid to unearth them if he were recalled.

Pauw was one of the founders of the Vrye Weekblad with Max du Preez and he exposed the police death squad at Vlakplaas, and he and Du Preez launched SABC’s investigative series, Special Investigation, and has years of reporting experience.  In these days of cut and paste journalism, with the exception of a few reporters and investigative units like amaBhungane very few of today’s reporters would have been able to produce a book of this calibre.

The President’s Keepers reads like a spy thriller.  It is not fiction and contains some damning allegations against big players in government circles and in the private sector. It will blow your socks off. There are 10 pages of colour images to add interest.