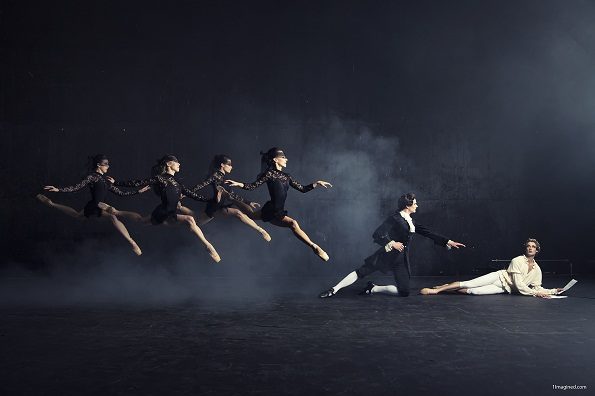 Marc Goldberg , The acclaimed choreographer of ‘THE VORTEX’ has combined a classical story with a 21st century design to bring a cinematic experience to modern ballet as it’s never been seen before. Digitalizing his sets yet retaining the silhouettes of the 17th century, this world premier promises to be a lot more than just beautiful dancing. The story made so famous by Sir Peter Shaffer’s AMADEUS, follows the rumoured rivalry of Mozart and court composer, Antonio Salieri. We witness dark undercurrents of jealousy and sabotage from Salieri, whose pious demeanour is challenged greatly on meeting Mozart. But the ballet is not just a story of political intrigue and envy. We follow the love story of Mozart and Constanze, their meeting, marriage and subsequent children, beautifully depicted within the palace gardens.

Another exciting facet to Goldberg’s adaptation is his exploration of what it might have been like to create such a prolific body of work by 35, as Mozart famously did. Sweeping scenes depicting Mozart within his own creative process add a layer to the story not previously explored.

Exquisitely crafted costumes by three separate designers and projected stylization of the Schonbrunn palace and other beautiful locations, frame the ballet company in this two act ballet, performed to many jewels of Mozart’s extensive repertoire.

Three years in the making, this new production boasts sumptuous visuals with 3D mapped projection! sweeping dancing and pas de deux’s that ballet audiences have come to expect, but ,If you have ever felt that perhaps, ballet wasn’t your thing , MOZART AND SALIERI will ask you to rethink what you know about ballet in South Africa.