November’s further downgrade of local and foreign currency by S&P Global and the looming threat of a similar downgrade by Moody’s has raised concerns about whether further downgrades to non-investment grade will follow early next year. 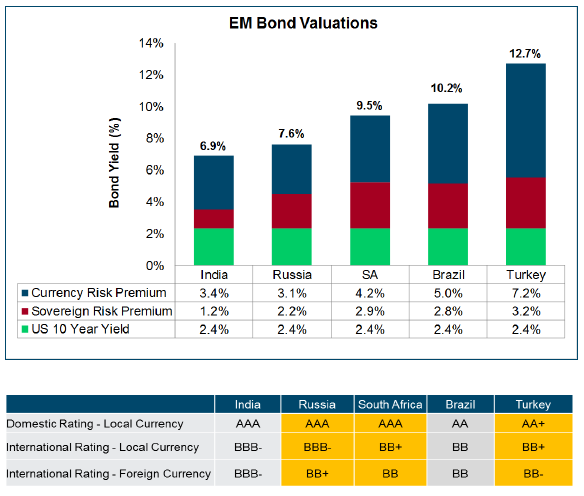 Jaco Pretorius, CEO of Ensimini Financial Services, says at the moment there is no immediate reason for investors to panic but it is worth noting what the impact of the latest downgrade has been and what further impact could be expected. TreasuryOne dealer, Phillip Pearce, agrees saying that demand for local bonds, despite being downgraded, has attracted massive interest and investors have decided that the return on offer outweighs the risks highlighted. “The portfolio inflows have bolstered the rand as it is apparent global markets are yield hungry in an environment of persistently low interest rates in the face of lackluster inflation,” says Pearce.

“The estimated $3.7 bn of SA bond exposure which has been cut from The Barclays Global Bond indices will result in excess supply issues for the local bond market as South Africa is excluded from global bond indices. We believe the SA bond market could then enter a period where bonds offer relative value to Emerging Markets peers until the selling abates or is absorbed,” says Pretorius.

Pretorius says as reported, the Citibank World Government Bond index (WGBI) exclusion will only occur if Moody’s downgrades SA debt to junk. He says if this were to occur however, more exposure to SA bonds would then be cut.

He says it is important to view the SA sovereign risk premium with other junk status economies like Brazil and Turkey. “We’ve seen, as expected, little movement in SA bond yields and this should maintain in 2018 unless the market starts to expect additional downgrades, then we will see a change in the relative risk premia. It is important to remember that SA yields are lower than Turkey and Brazil because the market attaches a lower currency risk premium to the Rand. This is premised on a strong central bank that has been successful in managing inflation under 6%.”

Comparison of the South African bond market against other Emerging Markets shows its resilience in the face of ongoing credit downgrades by ratings agencies.  Pretorius says this may be explained in part by the comparative Sovereign Bond Yields of other Emerging Markets. “SA bonds appear fairly priced and reasonable value against its Emerging Markets peers. As bonds are excluded from the indices following downgrades, they may exhibit relative weakness on excess supply and we would expect to see active investors in Emerging Markets funds enter the market,” he says.

In summary Pretorius says while there is no immediate reason to panic, investors need to be aware that should the status quo change, risk needs to be re-evaluated. “Waning of the overall appetite for Emerging Market Bonds; deterioration of SA’s fiscal metrics that could lead to further credit rating downgrades and possible intervention of the South African Reserve Bank Central bank could all impact the SA Bond risk profile in 2018. And of course, a shock in the outcome of the ANC elective conference this December could equally change our risk profile,” he concludes.