Children are full citizens under South Africa’s Constitution, but South Africa faces enormous challenges when it comes to providing our children with safe play areas and early learning tools, such as toys. 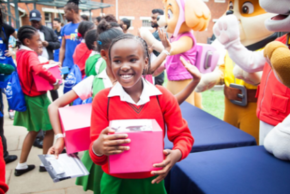 According to UNICEF only 29 percent of South African children have access to safe, child-appropriate play areas in their communities. Unequal distribution of safe play areas and toys erode children’s right to play.

This according to Gretchen Wilson-Prangley, CEO of Play Africa – a non-profit, social enterprise organisation championing inclusive public learning for the country’s most vulnerable. With this in mind, Play Africa has partnered with leading international children’s entertainment corporation – Spin Master Corp, and through its global Toy Movement campaign, the organisations will give thousands of toys to disadvantaged children in the country.

“Many South African children lack toys and other learning tools that can help stimulate a range of child-initiated, open-ended play activities, which bolster cognitive, physical, social and emotional development,” said Wilson-Prangley. “In order to honour children and their right to play, we need to respond to neuroscience research that consistently proves the importance of play and stimulation in children’s healthy development, and make provisions for play in every child’s daily life,” she said.

The official launch of the Toy Movement campaign took place at Constitution Hill last Friday, with support from Just Fun (Pty) Ltd, Nickelodeon South Africa, Ty Inc and Value Logistics. About 300 children from local schools, including Nkosi’s Haven received toys, meals and enjoyed live entertainment. A further 44 000 toys will be distributed to hospitals, orphanages, schools and community centres across the country during the holiday season.

“Spin Master’s vision is to make life more fun, and based on our position in the toy industry we feel it’s our responsibility to help children in need,” said Mark Segal, Spin Master’s Executive Vice President Finance and Chief Financial Officer. “The Toy Movement has the goal of bringing inspiration and the opportunity to learn, grow and play to children living in challenging situations and that’s what we hope to inspire. Many of us have roots in South Africa, so this is a particularly gratifying initiative,” he said.

Toy Movement has completed missions all over the world, including in Mexico, Israel, Jordan and Turkey, and 2017 marks its first year in South Africa.

“Play is how children learn, and every child’s right to play is enshrined in the Universal Declaration of Human Rights and the African Charter on the Rights and Welfare of the Child. We are thrilled to partner with Spin Master’s Toy Movement to help bring joy and the transformative power of play to thousands of children and their families this holiday season,” said Wilson-Prangley.

About The Toy Movement:

Spin Master (TSX:TOY; www.spinmaster.com) is a leading global children’s entertainment company that creates, designs, manufactures, licenses and markets a diversified portfolio of innovative toys, games, products and entertainment properties. Spin Master is best known for award-winning brands including Zoomer®, Bakugan®, Meccano®, and 2017 Toys of the Year, Hatchimals®, Air Hogs® and PAW Patrol®. Since 2000, Spin Master has received 83 TIA Toy of The Year (TOTY) nominations with 25 wins across a variety of product categories, including 13 TOTY nominations for Innovative Toy of the Year, more than any of its competitors. To date, Spin Master has produced six television series, including 2007 success Bakugan Battle Brawlers and current hit PAW Patrol, which is broadcast in over 160 countries and territories globally. Spin Master employs over 1,500 people globally with offices in Canada, United States, Mexico, France, Italy, United Kingdom, Slovakia, Poland, Germany, Sweden, the Netherlands, China, Hong Kong, Japan, Vietnam and Australia.