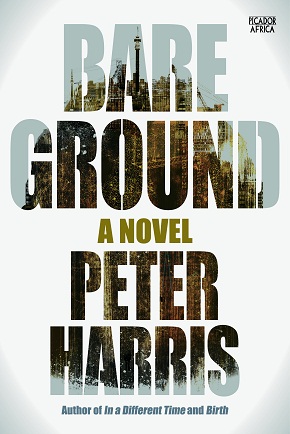 Peter Harris is a lawyer and has written two non-fiction books: Birth, about the events leading up to South Africa’s first democratic election, and A Different Time, the story of the Delmas Four, the ANC activists who embarked on a mission that would take them to Death Row. Both books were riveting.

Now Harris has ventured into the realm of fiction with Bare Ground. It is a gripping story and echoes the South African narrative: collusion, corruption, greed, political machinations, crime and a Presidency looking out for Number 1.

The action mainly takes place in Johannesburg, which although has a veneer of sophistication, underneath it is still a brash mining town where it’s every man for himself.

South African Max Sinclair, wealthy and Oxford educated,  is the head of Wits Mining, listed overseas as well, is one of the last to do an empowerment deal and to get government sanction they have to do it right. For do it right read bribery.  It’s the government that dishes out licences for mineral and mining rights, and if they don’t approve of members of the consortium who will be involved in the deal, or the way it’s structured, it’s goodbye licences and probably the mining company itself.

Although Sinclair does have his own contacts, he is good friends with the minister of mining and the deputy president, who doesn’t see eye-to-eye with the president, he needs more and someone else who has an “in”.

Enter his young protégé, geologist Sifiso Lesibe, who is a bit naïve politically, but he does have a friend Gugu Thabethe who apparently has the ear of the president and Sifiso knows human rights lawyer, Musa Madondo from when he successfully mediated in a strike at a Namibia mine.

Sifiso’s wife Lorato and Max’s wife Julia, both psychologists are also friends. The women warn their husbands to be careful and Julia predicts that it will end in disaster. But the manipulative Max ignores her and Sifiso doesn’t listen to Lorato; he believes Max is a good person. In any event he has his eye on the 25% stake worth millions that he will be given as a member of the consortium.

In the background, Walter Berryman, who was sacked from the Department of Public Works after he blew the whistle on a tender scam, is now working for one of the big five construction companies, and after a drunken night out with his boss, Bob Schussler, he finds a notebook (in code) detailing collusion between the construction companies and Sinclair is a major shareholder in one of them.

Berryman, an activist in the old days seeks out his old friend Musa, who walks the straight and narrow, but enjoys the good things in life, like a Porsche, for advice. There’s a robbery at Berryman’s home and he is arrested for drunken driving. It’s complicated and dangerous but Musa advises Berryman to do the right thing.

Sifiso also asks Musa for advice about the empowerment deal as many of his former clients are in the Cabinet. But some in government think Musa is too independent.

Apart from the deal which is taking up a lot of Sinclair’s time, he doesn’t spend as much time as he should with his ailing mother, and his relationship with Julia is getting shakier by the day. Crime makes an unexpected and shocking entrance for Julia and Max who are cocooned in their chauffeur-driven luxury car, when two guys with guns, do a smash and grab at the car next to them, while they’re in the slow-moving traffic.  Max is involved in another incident when he goes to one of South Africa’s top jewellers in Sandton City to buy a present for Julia. A gang blows up an ATM nearby and then rob the jewellery store, killing the jeweller, his assistant, and the shards of glass inflict serious injury on Max.

After he recovers,  Sifiso assures him that the deal is on track. But then the young geologist makes a dreadful error of judgement.

The story opens with a baby drowning in a pool at Max’s parental villa near Bonnieux, Provence. It is Max’s adored sister, Naomi, and he often remembers her when he opens his memory book.

The story doesn’t appear to take place at a specific period in the country’s history but when you read it you will know that it’s happening now. You’ve seen the newspaper headlines and heard about it on television news.

Bare Ground is a gripping read and you will be hooked from the first page to the last when you will see what Max saw from the window of the villa when his sister drowned. It’s an intriguing look at how the Rainbow Nation has been shattered … and shafted.