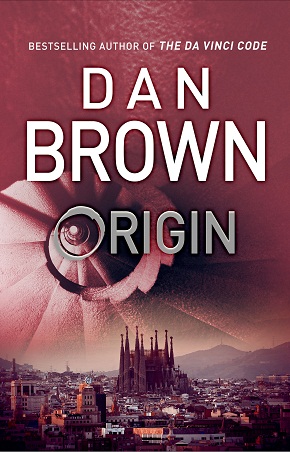 Professor Robert Langdon, the world famous symbologist is back, this time in a race to reveal an “earth-shattering” secret before the zealots and  fundamentalists can stop it.

The secret will answer the age old questions; Where are we going? Where did we come from? Computer genius, atheist and billionaire Edmond Kirsch, a former student of Langdon’s and now a good friend, has with his discovery, “boldly contradicted almost every established religious doctrine.” Langdon is specially invited to the presentation which will take place at the Guggenheim Museum in Bilbao, Spain, where the director is the attractive Ambra Vidal, the fiancé of Prince Julian, soon to be the next King of Spain. However, when she drops a bombshell in his lap, he distances himself from her, or so it appears.

Not much really happens in the first few pages, except that Kirsch calls a meeting of the three wise men, Rabbi Yehuda Koves, Bishop Antonio Valdespino and Syed al-Fadl, a prominent Jewish philosopher; a conservative, traditional Roman Catholic who has the ailing King’s ear; and a revered Islamic scholar respectively, to show them a “rough cut” of his presentation. But they are sworn to secrecy which puts them in a dilemma. Revealing it would consign the world’s religions to File 13, they believe.

When Langdon gets to the Guggenheim he is issued with a special headset customised for each visitor and as he begins his tour he is startled to hear a jaunty English voice introducing himself as Winston, a nod to Kirsch’s admiration for Winston Churchill, the British statesman. Kirsch is just starting his PowerPoint presentation, which incidentally is being broadcast to a record-breaking audience of millions around the globe, when a Roman Catholic fundamentalist with a lot of baggage, later identified as Luis Avila, a Navy Admiral whose family was killed by a bomb while they were at church, shoots him in the head, much to the horror of the hundreds of guests.

Avila is a member of the Palmarians, an ultra-conservative Catholic breakaway church linked to the Regent.

Watching the presentation and the murder of Kirsch is Ambra, who against the royal family’s wishes agreed to host the “reveal” at the Guggenheim. The assassination sends Langdon, Ambra and Winston, who is almost human in his interaction with people, in search of the 47-letter password which is a line from one of William Blake’s poems, to Barcelona where Kirsch lived and where his Super Computing Centre is based.

On the way, dodging Avila, they visit all the tourist sites including some of Antoni Gaudi’s architectural masterpieces, the ever evolving Sagrada Familia, the Parc Guell and La Casa Mila, one of his most famous buildings where Kirsch, an ardent admirer, lived on the top floor. There’s plenty of palace intrigue and the finger is pointing at Valdespino as the man who orchestrated the killing. The ailing King is ensconced in his summer palace and some key members of his Guardia have been arrested. But who is issuing the orders?  Adding fuel to the fire is ConspiracyNet.Com with surprisingly accurate updates from an exclusive informant monte@iglesia.com rumoured to be someone inside the palace

Langdon and Ambra find the password but to their dismay there appears to be an extra letter or two until the symbologist deciphers the symbol and reveals  Kirsch’s secret to the world. Is it really as earth-shattering as Kirsch promised? Did we come from primordial soup? Where are we going? Do we really need God to create life? These are the questions that Brown attempts to answer. In the end it’s simple. It has everything to do with science and technology and there’s no need for religions to wage war over it.  As Father Bena of the Sagra Familia points out to Langdon, “There is only one way Christianity will survive the coming age of Science. We must stop denouncing provable facts. We must become a spiritual partner of science…”  What did Rabbi Koves and Syed al-Fadl think. We don’t really know as they were dispatched before they could reveal Kirsch’s secret.

Origin is a great story, made for the big screen.  I just hope the scriptwriters speed up the action and leave the clichés on the cutting room floor.