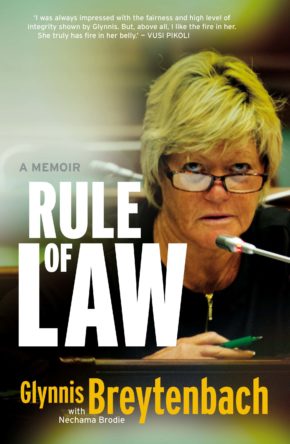 Cyril Ramaphosa, Deputy President and president-in-waiting has been ordered by the Pretoria High Court to appoint a new director of the National Prosecuting Authority (NPA) in the place of Advocate Shaun Abrahams within 60 days. Although President Jacob Zuma and Abrahams have indicated their intention to appeal, Ramaphosa could do worse than appoint Glynnis Breytenbach to the post. She has the experience and the balls.

Breytenbach, now the Democratic Alliance’s shadow minister for justice, has had a legal career spanning 26 years, first as a state prosecutor then as an advocate working for the NPA. The DA offered her the job as shadow minister after she was found not guilty on 16 charges at a disciplinary hearing instigated by the NPA. However, she was later charged with the same offences and is now facing a lengthy trial and if her book is anything to judge by she is not going to go down without a fight.

Breytenbach has been involved in many of South Africa’s most famous modern day court cases including Barry Tannenbaum, Dean Rees and Darryl Leigh who had been accused of running a R12.8 billion Ponzi scheme; and another which involved the South Africa’s General Export Incentive Scheme (GEIS). A A case that was of particular interest was the one that took 22 years and was of the offshoot of the Albert Vermaas matter. Basically Vermaas was charged with violating the Banking Act. An advocate Dr Eugene Berg helped him to set up the various channels and structures to facilitate the scheme.

But he misjudged Breytenbach’s skill and determination to get her man.

Berg was successfully prosecuted by the simple ruse of transferring the case from the regional court to the hug court. The law didn’t say you couldn’t and you didn’t have to have a reason.

However, her preparation for the case against spy boss, Richard Mbuli, who has been accused of murder and using the agency’s secret slush fund, is probably what led to her being hounded out of the NPA.

Breytenbach grew up in Kimberley and spent a lot of time on her own “when she knew she was in good company” but she wasn’t anti-social. Of necessity she was a tomboy and enjoyed sliding down the mine dumps on a sheet of corrugated iron; went fishing with the boys and played cops and robbers.

At Kimberley Girls’ High she was the first to get a motorbike and she was often in detention.

She has always preferred animals to people, she writes, and had many dogs when she was growing up and horses, which she kept on her smallholding outside Pretoria and carried on riding until her last horse died. She still owns dogs and now lives in Green Point.

She also swears like a trooper but never in court or in Parliament.  Her favourite expression is the F-word because “it’s expressive”.

That steely exterior is just a façade.

She first made a name for herself when she prosecuted a child abuse case and took no prisoners.

In Rule of Law Breytenbach explains the workings of the courts, what it really means to be a prosecutor, the shenanigans at the NPA and how the justice system in South Africa has been eroded. But she is determined to put it right again. Throughout the book she stresses the importance of an independent judiciary.

There’s been much said about her relationship with philanthropist Natie Kirsh whom she first met when she was prosecuting David Alexander over the Securefin matter, about re-engineering insurance policies. Alexander defrauded Kirsh to the tune of R248 million. She regards him as a father figure and takes no major decision without discussing it with him first. As for the allegations that she’s a Mossad agent, she laughs it off. Early on in the book she relates how her grandmother Olga, told her  three days before she died that she was Jewish. “It’s not safe to be a Jew,” was the only explanation she ever got.

One chapter that makes particularly frightening reading is Accused Number 1 S vs Glynnis Breytenbach in which she explains how the NPA reinstated the charges against her.  She makes it sound like a comedy of errors but there is nothing funny about it. She’s also been shot at a few times but her assailants came off second best.

Finally , she says that South Africans need to understand the power of the vote.” It is within their ability to shape their own society. Jacob Zuma will be a bad patch, a blot on our history. But it’s temporary and won’t last forever.”

Although Breytenbach believes implicitly in the rule of law, she has empathy for the victim and the complainant and always tries to temper justice with mercy.

Rule of Law is interesting reading and there are many humorous touches. It is an insider’s look at what has happened to our justice system and how one person can make a difference, if they want to.