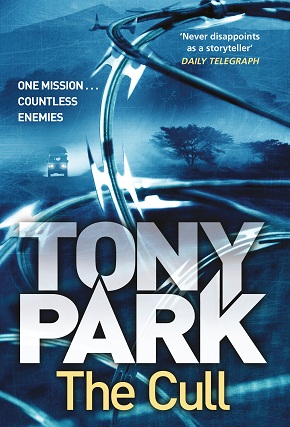 When Park first started writing his Africa thrillers many people dubbed him Australia’s Wilbur Smith but I’ve always known that he would be better than the celebrated writer who gave us the best-selling When The Lion Feeds, which was banned by the National Party. Park proves his class with his 14th offering, The Cull

Sonja Kurtz, ex-mercenary and Hudson Brand, safari guide and private investigator featured in The Delta and An Empty Coast. Kurtz is on the run after a failed roadside assassination attempt on Zimbabwean president Robert Mugabe but then she saves the Okavango from an environmental disaster in The Delta. In An Empty Coast she is on a revenge mission in Vietnam to kill the kingpin of a rhino horn poaching syndicate when she gets a call from her student archaeologist daughter Emma to help identify a body dating back to the 1980s the team have found at a dig near the Etosha National Park in Namibia. Hudson, too, has an interest in trying to solve the mystery.

Now the pair are involved in another hair-raising adventure. Kurtz turned her back on war and fighting after her conservationist partner, Sterling Chapman (The Delta), was killed while making a documentary on rhino poaching. She is voluntarily working in the Sabi Sands Game Reserve as head of the Leopards, an all-women anti-poaching team whom she is mentoring and helping to train. When they are ambushed and two members of her team killed while they are on a night patrol as part of their training and the National Parks’ helicopter is shot down. She also calls in an expert tracker, Ezekial, who leads her to the spot where the poachers broke through the fence.

During the chase two men in a bakkie are killed by Kurtz and one of her Leopards, Tema Matsubela. One of them is Shadrack, Tema’s neighbour, a “simple-minded” man who works the gardens at Hippo Rock where Hudson lives in a friend’s house that he has been sharing with Kurtz.

After the encounter, multi-millionaire businesswoman, Julianne Clyde-Smith, who owns Lion Sands Lodge and other luxury game resorts across Africa, offers Kurtz a job to head up an elite anti-poaching unit tempting her with information about the gang which has already crossed the border into Mozambique. And Clyde-Smith knows this because James Paterson (like the author but with one T) is head of security and has the latest weaponry which will be made available to Kurtz and whoever she recruits to her cause of taking down Africa’s poaching kingpins.

Kurtz has her doubts and does not want to get involved in a Black Ops (read hit squad) mission.

Back at Hippo Rock much, much later that night Kurtz gets angry when Hudson tells her that police captain, Sannie van Rensburg, who once arrested him on suspicion of murder, had dinner there, she walks out because she thinks that the captain and her lover had more than dinner. Kurtz met Van Rensburg briefly when she turned up at the ambush scene.

Kurtz accepts Clyde-Smith’s offer and soon she becomes a target of the Scorpions believed to be the brains behind the poaching syndicate. Kurtz  has recruited Tema and a psychopathic mercenary, Mario Cuna, now a sculptor in Nelspruit, whom she and Hudson knew from the Angolan War.

Meanwhile Shadrack’s mother, asks Hudson to investigate her son’s death because she believes he is innocent.

The action is fast and furious and ranges from the Kruger National Park to the Serengeti Plains in Tanzania, and points in between. The body toll mounts up and Kurtz can’t tell friend from foe. The Russians are also involved and one, Nikola Peeves, is suspected of being the head of the Scorpions. There are a few questions: Is Clyde-Smith an unwitting pawn? Or is she just a misguided bunny hugger? How does Paterson (with one T) fit in? Will Hudson and Sonja kiss and make up?  It all blows up at Clyde-Smith’s resort Khaya Ngala and the truth comes out. The Cull ends in an explosive climax at the small village of Kipili in Tanzania. Park has written another blockbuster and if you haven’t read any of his other books, the Cull will make you a fan. It also works well as standalone.