Cricket South Africa (CSA) on Monday, announced the 15-strong Coca-Cola South Africa under-19s squad to take part in the 12th edition of the ICC U19 World Cup in New Zealand from 13 January to 03 February 2018. 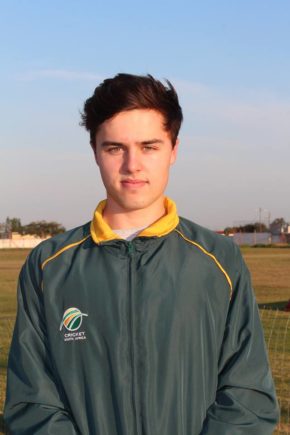 The team will be captained by Free State’s Raynard van Tonder, who will lead the side for his third major tour.

Other exciting selections include opening batsman Matthew Breetzke, who has already made his franchise debut for the Warriors and was the leading run scorer for the aspiring Proteas with 238 runs in their recently concluded Youth One-Day triangular series against England and Namibia in Potchefstroom. Gauteng’s Wandile Makwetu also cracked a nod for the second time and is the only player selected in the team with previous World Cup experience. The wicket-keeper/batsman was a part of the Bangladesh tournament in 2016.

In the bowling department, 17-year-old Thando Ntini looks set to follow in his father, former Proteas fast bowler, Makhaya Ntini’s footsteps. The youngster has impressed selectors over the last 12 months and earned his spot to appear in youth cricket’s biggest event.

“Congratulations to all the players who will be representing our country in New Zealand. We wish them everything of the best in the knowledge that they will represent us well and maintain the standards set by their predecessors,” commented CSA Acting CEO, Thabang Moroe. “I also extend best wishes to our head coach, Lawrence Mahatlane, and his management team who I know will leave no stone unturned to ensuring our squad is well prepared.

“When you look at this group of young players with their diverse backgrounds you see confirmation that development, transformation and excellence are all linked together in providing a very exciting future in fulfilling our vision of being a truly national sport of world-class standards,” concluded Mr. Moroe.

The U19 World Cup which is held every two years, will see 16 teams face off for a chance to claim the 2018 honours. South Africa, under the captaincy of recently capped Proteas Test opening batsman, Aiden Markram won the 2014 edition of the competition. Players born on or after 1 September 1998 are eligible to participate.

Team coach, Lawrence Mahatlane is confident that the selectors have made the right choices and is excited by the collective experience of the team, he said:

“It’s definitely one of the most exciting times in these kids’ lives and careers and it’s a thoroughly deserved honour that they receive today. This is the culmination of the last 24 months’ hard work and they have certainly put in the hours and effort to be named in this World Cup squad.

“I’m very excited as a coach to take this group to New Zealand, they are massively talented with the potential for even greater things and I’m confident that we have chosen the combination that will give us the desired results. More than half of the squad have semi-professional cricket experience and we even have a franchise player in Matthew Breetzke. I’d like to take this opportunity to thank all of the semi-pro coaches who bought into our vision for this team and for allowing these players space in their teams to help them prepare for what’s to come in less than a month now.

“I’d like to convey my own congratulations to this team of incredible youngsters, who have played a lot of cricket so soon after writing exams, whether at school or university and done so with a lot of focus. We look forward to going the World Cup and making the country proud.”

According to the event format, the top two sides from each group will advance to the Super League while the remaining eight teams will figure in the Plate Championship. The preliminary round matches will be followed by quarter-finals, semi-finals and finals, plus the play-offs.

“Coca-Cola Africa is a longstanding supporter of the development of South Africa’s next cricket heroes through our sponsorship of the Coca-Cola Khaya Majola Cricket Week, Coca-Cola Schools T20 Challenge and the Coca-Cola SA U19 team. I would like to congratulate every player selected for the Coca-Cola SA U19 squad to represent South Africa at the 2018 ICC U19 Cricket World Cup. For many of them, this is just the beginning of a long, illustrious career in international cricket.”